FoxNews.com Publishes ‘Exclusive’ Alien Research That Is Both Questionable And From 2004 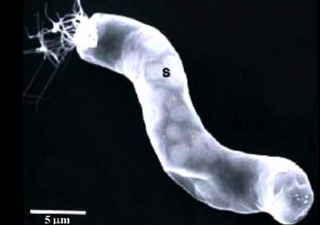 Fox News gets plenty of flak for its political coverage from detractors, but today it’s the network’s science coverage that has come under fire. An article on the network’s science page boasts a shocking “exclusive“: a scientist has found life on other planets! Fascinating, except Gawker’s Adrian Chen did some research on the scientist behind the discovery, and it appears that the finding is not quite new and about as “exclusive” as a Charlie Sheen interview.

“We are not alone in the universe– and alien life forms may have a lot more in common with life on Earth than we had previously thought,” Fox boasts, announcing a report by Dr. Richard Hoover claiming lifeforms in meteorite fragments show life exists elsewhere in space. They continue:

That’s the stunning conclusion one NASA scientist has come to, releasing his groundbreaking revelations in a new study in the March edition of the Journal of Cosmology.

Dr. Richard B. Hoover, an astrobiologist with NASA’s Marshall Space Flight Center, has traveled to remote areas in Antarctica, Siberia, and Alaska, amongst others, for over ten years now, collecting and studying meteorites. He gave FoxNews.com early access to the out-of-this-world research, published late Friday evening in the March edition of the Journal of Cosmology. In it, Hoover describes the latest findings in his study of an extremely rare class of meteorites, called CI1 carbonaceous chondrites — only nine such meteorites are known to exist on Earth.

Though it may be hard to swallow, Hoover is convinced that his findings reveal fossil evidence of bacterial life within such meteorites, the remains of living organisms from their parent bodies — comets, moons and other astral bodies. By extension, the findings suggest we are not alone in the universe, he said.

Chen’s research found several questionable items related to this study– first and foremost that the exact same study has been around since at least 2004, and has resurfaced repeatedly in years previous until as recently as last month. Very fishy. Chen even questions the website of the Journal of Cosmology apparently republishing the findings soon on account of their website, among other things, looking like “it was designed by a New Age music retailer in 1997.” But they’re cosmologists, not web developers, so maybe the benefit of the doubt is in order here.

It’s likely whoever wrote the article was duped by either a press release or an article elsewhere– let’s face it, aliens are not Fox News’ forte– and the veracity of the study, extreme skepticism aside, has not been 100% debunked. Needless to say, however, that a quick Google search would have saved the site plenty of embarrassment had they realized there was a good possibility this news wasn’t “exclusive.” But one thing’s for sure: whoever sold this to Fox as an exclusive (likely Dr. Hoover himself) has some explaining to do.