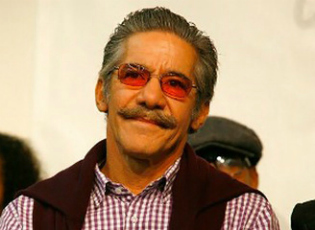 In a column posted on Fox News Latino, Geraldo Rivera lambasts his cable news colleagues for their repeated use of the term “illegal aliens” when describing undocumented immigrants from Latin America.

“Cable news and talk radio are making a killing demonizing undocumented immigrants,” he begins the column. “In terms of ratings, few issues resonate as reliably.”

Demonizing undocumented immigrants, Rivera asserts, is good for business. He says the story is “cheap” and “easy to illustrate” because “ample file footage exists in every news outlet’s video library of young Latinos jumping the border wall or wading across the Rio Grande.”

“The typical report,” Rivera explains, “consists of a TV anchor or radio talk host lamenting either how our nation is being drowned by the brown tsunami from south-of-the-border, how they are sucking the nation’s life blood or how one of the invading Latino hordes committed a crime, which is far more egregious than if a citizen committed the same crime, ‘because they had no right to be here!'”

Rivera then takes aim at what he sees as an egregious combination of two pejoratives making the phrase “illegal aliens.” He calls upon cable news networks to stop using the phrase altogether:

I have a lawyer’s reason for wanting media outlets like my own to ban or at least modify the phrase. Absent a finding by a judicial or administrative body, it assumes a legal conclusion, that a person has no right to be in the United States. Given that every person whose resident status is questioned has the presumed right to a hearing on the matter, with an appellate process following a negative result, isn’t the media’s use of the expression as lazy as assuming the guilt of a person accused of every other crime?

It’s not the first time Rivera has criticized cable news networks, including his own, for their coverage of the immigration debate. Several months ago, Rivera got into a heated exchange with co-worker Eric Bolling, saying he found Bolling’s attitude towards illegal immigrants to be “way too hard-lined, way too draconian,” and not “in any sense humane or American.”