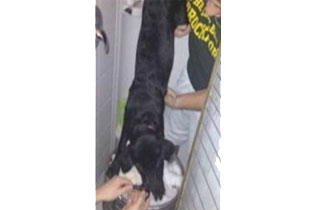 Dogs doing kegstands might sound like an epic stunt pulled by the dopest bros, but Syracuse police recently arrested two SUNY Brockport students for pulling this off, and committing animal cruelty in the process.

In a tweet sent out from @SUNYPartyStories, a Twitter feed devoted to chronicling how hard SUNY students rage, a Labrador retriever is seen being held upside down over a keg by an unidentified man at a Brockport party, with the caption “Keg stands n Bits!” The photo itself sparked accusations of animal abuse, and the tweet was eventually deleted — but not before the Syracuse police began an investigation that led to the arrests of two 20-year-old male students. (Neither of them owned the dog in question, and apparently stole the dog?) Robert Yates, was charged with torturing and injuring animals.

According to police, the dog didnOut of curiosity, what would happen if a dog did a kegstand? According to a veterinarian who spoke to TWC Rochester, “dogs will react to alcohol much like humans do. Because of their small body mass, he says giving a dog alcohol is like giving alcohol to a child. Younger dogs like Mya [the black lab in question] can have an even harder time breaking it down.”

So yeah, don’t make your dogs drunk. And also, if you’re a Twitter feed that regularly posts photos of passed-out girls and thought that publishing a photo of a dog doing a kegstand was a good idea, don’t tweet these — you’re just making yourselves look more douchey:

Any news reporter that thinks a dog posed doing a keg stand is a worthy story needs to reconsider their career.

We're not defending the picture, just saying MUCH more important things happening in the world. Y'all are too thirsty for a flashy headline.