Saudi Blogger Raif Badawi to Be Flogged For Insulting Islam 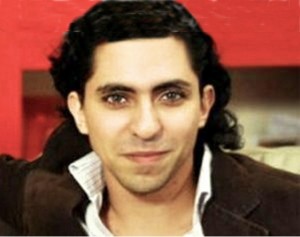 Freedom of expression isn’t having a good month.

A few weeks ago, Sony capitulated quickly to baseless threats from the North Korea Geek Squad that it would start bombing movie theaters across America if they dared showed The Interview (because North Korea in general has shown a remarkable capability to strike desired U.S. targets exactly zero times before). Then we witnessed the horrific attack on Charlie Hebdo that left 12 dead–many via execution–because they dared to even broach the topic of the Prophet Muhammad. Most of American media responded by courageously either blurring out or outright cropping a cartoon of Muhammad once being proudly held up by its murdered editor, Stéphane Charbonnier.

In the end, terrorism won on both fronts: most of our media showed the attack over and over (always the goal of any terror group) while no longer showing any sensitive cartoons related to the incident. That’s what’s called a win-win for the bad guys. And the part seemingly lost in all of this? Since when exactly did jihadists ever need a legitimate excuse to murder innocents? If it wasn’t Charlie Hebdo’s editorial decisions, another excuse would have easily been found to strike somewhere else. Finally, how’s this for irony? The French are standing firm (Charlie Hebdo will bravely resume publishing next week) while the American media is waving the white flag. It’s like World War II, but different…

Now here’s another story on the topic of free speech that isn’t getting very much coverage at all: A Saudi blogger will be publicly flogged tomorrow because–authorities there say–he insulted Islam on an online forum he created. So what does insulting Islam get a blogger in terms of punishment in Saudi Arabia these days? Try 10 years in prison and 1000 lashes. The latter doesn’t occur all at once, of course, but at the rate of 50 lashes per week over the next 20 weeks, which is basically a slow death sentence via torture. In a related story, Saudi Arabia called the Charlie Hebdo siege a “cowardly terrorist attack that was rejected by the true Islamic religion”. But flogging a blogger 1000 times for encouraging free speech? Not cowardly at all. With American friends like these, who needs enemies?

The blogger subjected to all of this is named Raif Badawi. He had run a site called Free Saudi Liberals, which included columns unfavorable of Saudi religious leaders and historical Muslim figures. As you probably guessed, the site has been shut down. And as an added bonus, the 30-year-old Badawi was also ordered to pay a fine of $1 million Saudi riyals, or $266,000 American…because…you know…that government is a little cash-strapped right now.

He has been held since mid-2012. But before you ask what kind of lawyer would allow his client to sentenced so harshly, it should be noted said lawyer–Waleed Abul-Khair–was sentenced over the summer to a mere 15 years in prison after being found guilty of–get ready for this–“undermining the regime and officials,” ”inciting public opinion” and “insulting the judiciary.” while representing Badawi. Mr. Abul Khair is also banned for traveling for 15 years when he finally gets out. Stay classy, Saudis.

Everyone from Amnesty International to the U.S. State Department has called for the lashes to be cancelled and sentence reconsidered, but to no avail. Seemingly more than ever in modern society, freedom of expression is under attack all across the globe: American movies, French satirical magazines, Saudi bloggers. It will continue to be under siege now and forever in some capacity.

The question is…do we have the stomach to defend it the way the aforementioned Charlie Hebdo’s Stéphane Charbonnier did with this declaration?

Hopefully Raif Badawi can find the strength to display some of the same steely resolve and defiance. Either way, it is truly hard to believe any of this can still happen anywhere in the 21st Century…