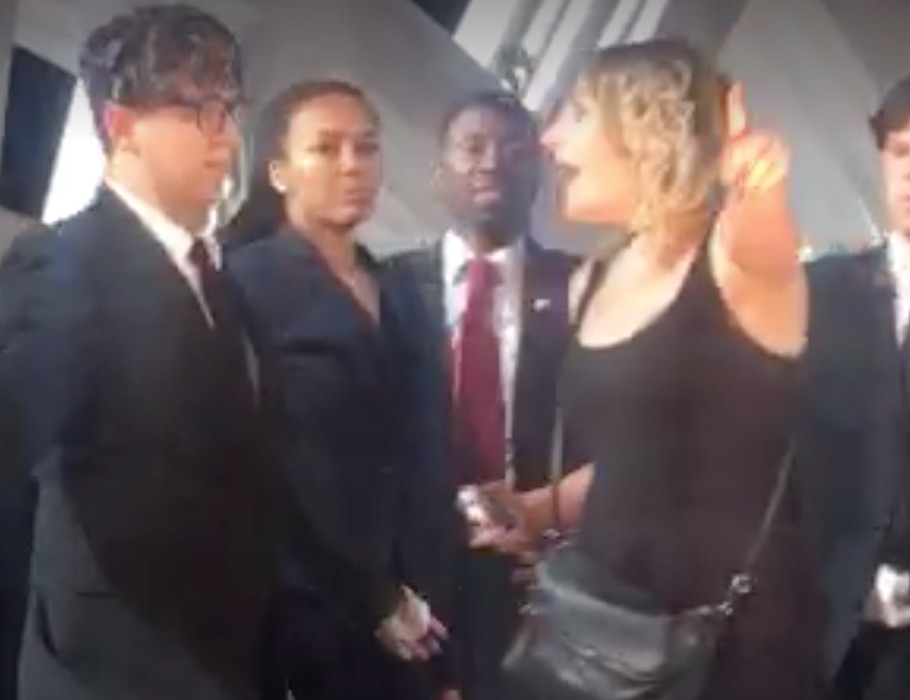 Friday night’s production of the controversial Julius Caeser that depicts President Trump‘s assassination was halted when a pro-Trump protester walked onstage and began shouting down the actors.

Laura Loomer, who documented the entire ordeal via Periscope, stormed the stage and shouted “Stop the normalization of political violence!” and accused the actors of “promoting violence against the right.”

She was quickly escorted off the stage by security and was arrested by the police. She was charged with trespassing and disorderly conduct, but was let go not long after.

When all of this went down, #FreeLaura began trending on Twitter among Trump supporters.

The old right losers who are upset about what Laura did don’t realize that unlike them, we fight – and that’s why our guy won. #FreeLaura

BREAKING: Laura Loomer was arrested for protesting Shakespeare in the Park. She stood up against political violence. Bravo?#FreeLaura

It’s a sad day in America when a lady is arrested because she didn’t want the President assassinated, and had the guts to say so. #FreeLaura

In New York you’re aloud to pretend to Assassinate the President, but if you try to protest the assassination you get arrested.#freeLaura

Shut the play down @NYCMayorsOffice why & how can this be ok the week of the GOP attack. Seriously ? #ShutdownShakespeareInThePark #MAGA https://t.co/a12x38FO9l

Woman protesting public murder of Trump is arrested by police at Julius Ceacar in the park! https://t.co/fIwQcB4a0L

After being released from jail, Loomer took to Twitter with a crowdsourcing link to raise money for her defense fund.

I’m out of jail, but I’m not apologetic. Thanks to everyone who is supporting me & condemning political violence. https://t.co/QkZkxu1yCj