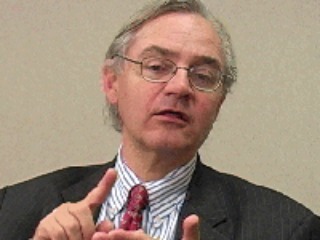 In his column yesterday, the Washington Post‘s E.J. Dionne asked “What might a reasonable, constructive presidential campaign look like?” According to Dionne, such a campaign would focus on the following:

Start out by defining goals everyone could rally around. We need to get the economy moving faster and bring unemployment down, an all-the-more-urgent imperative after last week’s disappointing jobs report. We want all Americans to share prosperity and to reserve the trend toward widening inequality. We want a sustainable budget where, in good times, revenue more or less matches expenditures. And we want an education system that prepares members of the next generation for productive and rewarding lives.

Throughout the rest of the column, Dionne outlines solutions that are center-left at best and
typically left of center-left. However, the most ridiculous part of the column came when he
highlighted what his prioritized issues ignore:

Notice a few things about this list. It does not include social issues. Many Americans on
both sides of politics legitimately believe that matters such as abortion, gay marriage,
gun control, contraception and religious liberty (I could mention others) are of absolutely
central concern. Some of them would reject my agenda at the outset. I’d defend it by
insisting that the vast majority of Americans, whatever their views on any of these vexing
subjects, want to get to certain basics first. They know the social issues won’t go away.

What is the problem with this paragraph? While most Americans do indeed want politicians and
candidates to focus on the economy, Dionne’s high-minded lecture ignores that most GOP focus
on these issues has only been in response to what the Administration has done. Consider:

1. In May, Vice President Biden, Education Secretary Arne Duncan and President Obama announced support for gay marriage, in that order, in the same week. Until that point gay marriage was rarely mentioned on the campaign trail, yet this week it is First Lady Obama who is telling Twitter followers she supports it as well. The President’s announcement on his support for homosexual marriage – which has evolved from supporting to opposing to now supporting legal recognition of homosexual relationships – also came after NBC’s Chuck Todd noted the importance of “gay money” to the President’s campaign.

2. Religious liberty, contraceptives and abortion became issues in January 2012 solely
because the Administration decided to institute an unconstitutional contraception/abortifacient/sterilization mandate. For no other reason did the importance of religious liberty and contraceptives rise above the economy and education, and for no other reason did abortion rise above its normal level of importance to certain (admittedly significant) segments of the voting public. Yet Dionne (who initially hammered the President for the mandate), Gail Collins and other liberals are now playing blocker for the President. This despite the fact that the “compromise” on the mandate changed little or nothing from the original.

3. Regarding gun control, Dionne ignores that the President’s appointments of Justice Kagan and Justice Sotomayor to the Supreme Court make gun control an issue. Both have records in opposition to the freedom to own weapons, yet the President nominated them. Why should conservatives assume the President would do any differently if one or more justices retire during a potential second term?

In pretending that both sides are the problem when it comes to what Dionne claims are misprioritization of campaign issues, Dionne is in fact providing cover for the President. Most establishment and grassroots conservatives and Republicans wanted a GOP focused on the economy, and this has been reflected in Mitt Romney’s ads – ads that almost exclusively highlight the President’s failures and policies on the economy, taxes and spending, not social issues. It is the President who has highlighted social concerns, perhaps because he knows he a factual campaign on the economy wouldn’t work. “Things would have been terrible instead of just bad except for my policies” isn’t exactly “Hope & Change.”

Dustin Siggins is a policy and politics blogger who regularly contributes to HotAir.com’s Green Room and Race42012.com. He is the co-author of a forthcoming book on the national debt with William Beach of The Heritage Foundation.”