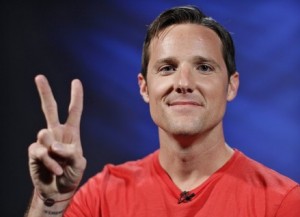 Several people attempted to calm him down and when officers arrived they said he was cooperative.

“He was no problem for the police department however, during the evaluation we learned that we probably needed to take care of him,” said Brown at a press conference. “So officers detained him and transferred him to a local medical facility for further evaluation and treatment.”

The statement continues, “He is now receiving medical care and is focused on getting better. The past two weeks have taken a severe emotional toll on all of us, Jason especially, and that toll manifested itself in an unfortunate incident yesterday.”

“Jason’s passion and his work have done so much to help so many, and we are devastated to see him dealing with this personal health issue. We will always love and support Jason, and we ask that you give his entire family privacy during this difficult time.”

A self-proclaimed Christian, Russell is married to his “best friend for over 23 years” and has two children. He’s also said he’d like to have nine more children.

Good thing Invisible Children’s video and organization has been under a great deal of scrutiny since Kony 2012 was released. In the wake of concerns about their financial transparency and general approach, this will do wonders to help their image.