From Trump to Hillary to Myopic Voters to POTUS, 2016 is Now Officially Abhorrent 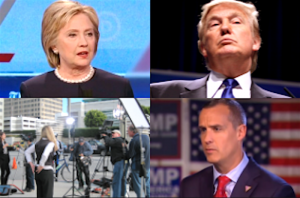 When this campaign season was 300, 400, 500 days away and there were 23 candidates instead of a single handful, the silliness of it all was embraced by many in the media, even in this space. The thought process was as the candidates dwindled and policy positions and contrasts became more clear, everyone — the contenders, the media that cover them — would sober up and get down to business.

But that obviously isn’t happening. Over the past two weeks in particular, it’s clearly been quite the opposite. And almost all of those I speak to outside the media and political bubble, those with regular lives — single, married, kids, no kids, city, suburbia, doesn’t matter… the ones who don’t eat and breathe this stuff — find the leading vote-getters left to be repulsive, classless, phony, corrupt or all of the above. It appears to those who appreciate civility, gravitas, authenticity, accuracy and principled perspective… that this race is now showing just how far we’ve sunk as a society.

Lest anyone think we’re talking only about Republicans candidates here either, there’s plenty to hang our collective heads about to go around. Democrats are openly gleeful about what they’re seeing out of the Republican race. In the recent past alone, potential First Ladies have become social media roadkill, and not because of attacks by Democrats.

The campaign manager of the GOP frontrunner is now facing the Simple Battery Trail of the Century in May. And if you don’t think Corey Lewandowski isn’t going to get the O.J. treatment complete with helicopter media coverage of him driving to the courthouse on the day of the proceeding, you haven’t been paying attention. As for that video you saw looped 584 times per hour yesterday, it may enter the stratosphere of somewhere between the Zapruder film and the Ray Rice footage within the next 20-43 minutes if the current pace keeps up.

The Texas Senator in second place on the Republican side has been accused of adultery by a Pulitzer-nominated tabloid who has endorsed Donald Trump for president. The story, of course, barely contains any details (but plenty of exclamation points!) and has only one person in Roger Stone (Trump’s unofficial official adviser) on the record, but that still didn’t stop the story from controlling the domestic news cycle last week when Brussels wasn’t the focus.

The Ohio Governor needs to win 116 percent of delegates remaining — obviously a mathematical impossibility — all in hopes of limping to the convention with just enough delegates to make a case to be nominated during the quagmire/chaos at a possible contested convention in Cleveland.

All three candidates remaining in Trump, Cruz and Kasich now seem to be backing off from their pledge to support the eventual nominee, per CNN’s Town Hall last night.

Donald Trump now owns unfavorable ratings in the 60s (Real Clear Politics average of 63.2 unfavorable vs. 30.4 favorable) and is already in the 70s among registered women voters (CNN). Check that, Mr. Kasich… maybe it is a good idea to stick around for awhile.

For the Democrats, it’s a whole other bowl of wrong. The debates and rhetoric has been relatively civil, yes (unless you’re in the Clinton camp, who warned the impossibly-polite Bernie Sanders about his tone this week). But that doesn’t eliminate the fact that a majority of Democratic voters simply do not care its delegate-leader is under investigation. All told, nearly 150 agents (correction on the Washington Post’s original report: fewer than 50) are still investigating as we speak. Said investigation has reportedly gone beyond her decision to break State Department protocol and use an unsecured home-brewed server and now extends to the Clinton Foundation as well.

Donald Trump once said he could stand on 5th Avenue and shoot someone, and people would still vote for him. Democrats point and mock Trump supporters for being drones who will do and believe whatever Lord Donald says. But in supporting Hillary Clinton — and a majority of Democrats say they would support a candidate even if under indictment (Rasmussen) — that kind of same robotic myopia exists.

At the same time, the current Commander-in-Chief is doing the wave at a baseball game just hours after major terror attacks in Brussels. His remarks on said attacks from Cuba last a whole 51 seconds that same day, where he makes the perfunctory calls for the world to unite against terror (you know… the same guy who blew off a solidarity march in Paris attended by major world leaders). And a day after leaving Cuba, he’s Al Pacino in Scent of a Woman (minus Gabrielle Anwar) in Argentina. Tom Brokaw put it best on MSNBC last week:

“So much of politics and national security is a combination of symbolism and reality,” he said. “The reality is that we did have that attack yesterday. It was unnerving to us, it was devastating in Europe.”

“But at the same time, the symbolism is that the president stayed at the baseball game all day long where you would have thought he would have said, ‘Look, we’ve got more business that I have to deal with, I wish you well,’ get on the phone,” Brokaw said.

“We’ve got to put together some kind of a bulletproof syndicate to deal with all this,” Brokaw argued. “There’s a real urgency about it, and he has got to convey that, not just to the American people but to the world.”

Meanwhile, Bernie gets points for his authenticity and professionalism, but practically no one in major media really prefers to perform anything resembling a deep-dive into tax plan ramifications on the economy or what/how exactly “taxing Wall Street speculation” gets everyone a free college education in this country (paging John Oliver). But because he’s lovable, draws big crowds and gets Larry David on Saturday Night Live, he basically remains scrutiny-free despite trailing the aforementioned Clinton by only 268 pledged delegates and could very well be the nominee if an indictment (or recommendation for indictment) occurs and all of those untied superdelegate are compelled to jump to him.

Add it all up, and a Trump-Clinton general election is still the most likely scenario (although nothing that can be counted on if the unpredictability of this race is any indication). They obviously have the most name-brand recognition. They also easily have the highest untrustworthy and unfavorable numbers. The good news for Democrats is that this scenario favors their party for this one reason pointed out by National Review’s Jim Geraghty this week:

You know how we laugh that only 37 percent of Americans think Hillary Clinton is honest and trustworthy? Only 27 percent say that about Donald Trump. The Republican party is about nominate the one guy who nullifies all of Hillary Clinton’s weaknesses.

There’s a famous South Park 2004 episode where a vote on the school mascot is being held. The choices came down to a giant (female body product) and a (human waste) sandwich (as a service to you, the reader, I’m not looking to ruin anyone’s meal here in an attempt to keep things somewhat classy). Anyway, that’s what this election may well come down to in the eyes of more than half the country. And it’s not like this is happening under the radar: Political television ratings are completely off the charts, at least in the cable news world: Fox is now the #1 network not just in cable news, but all of cable (up 50 percent in the demo in prime for the first quarter of the year compared to 2015). CNN has exploded, up 139 percent in prime and is nipping at Fox’s heels in this category (483k to 462k), while MSNBC is up 69 percent after a year of major changes in dayside.

Election year numbers always shoot up, but never to this extent. People are paying attention, as reflected in ratings as well as polling. Example: 69 percent of those surveyed (Gallup) say they’re following the election “very closely” or “somewhat closely” (nearly double of 2012 at this time) while only eight percent say they’re not following it at all.

Can we do better than a certain product against a certain sandwich? Pretty sure we can. But running for president clearly appears to be an endeavor few – particularly outsiders – have the stomach for (and who can blame them?). So what you’re seeing is likely what you’re getting in November…

Many Democrats point and laugh at the ridiculous Republican race, all while failing to see their own glaring shortcomings, particularly as it pertains to its frontrunner. Despite all the noise and reality show entertainment, it’s increasingly hard and — yes — annoying to try and absorb it all every day. And if a recommendation for indictment of the one candidate currently under investigation actually happens? Well, you ain’t seen nothin‘ yet…

The attacks in Brussels or Turkey — where six Americans died — should have served as a reminder of the need to get away from the tabloid stuff and focus on the bigger picture, the bigger issues.

It’s painfully apparent that’s not going to happen over the next 222 days.

– Correction: The National Enquirer was only nominated for a Pulitzer. The author regrets the error.