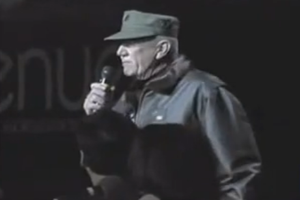 The Obama administration really can’t catch a break when it comes to random celebrities. Add to an army that includes Fabio, Snooki, and Jon Voight, among others, Full Metal Jacket star turned GEICO spokesman R. Lee Ermey, who railed at the president’s “socialism” at a Toys 4 Tots charity event this week. With this addition, the anti-Obama celebrity league is sure a list to rival the cast of that Norwegian sitcom promo.

Ermey took the stage after a performance at the event and festooned the present members of the Marine Corps with overwhelmingly kind words of praise. After those words, he noted that “I hate to point fingers at anybody” before proceeding to prod his finger thick into the Obama administration:

“The economy really sucks. Now I hate to point fingers at anybody, but the present administration probably had a lot to do with that. And the way I see it, they’re not going to quit doing it until they bring this country to its knees. So I think we should all rise up and we should stop this administration from what they’re doing because they’re destroying this country. They’re driving us into bankruptcy so that they can impose socialism on us and that’s exactly what they’re doing. And I’m sick and damn tired of it, and I know you are too. But I know that the Marine Corps will be here forever; this administration won’t. Semper Fi.”

And with that outburst, he takes his leave quietly back to his table, where the cohosts, clearly somewhat stunned, ask him how he “really feels.”

So this leaves the following question: which completely arbitrary person of measurable fame will lash out at President Obama and his administration next? My money’s on Erik Estrada. The bizarre and somewhat comical clip below: