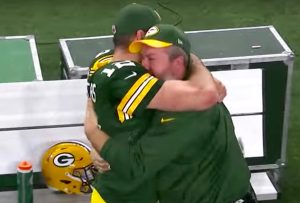 When the Green Bay Packers were 4-6 and written off by nearly all of the experts, quarterback Aaron Rodgers made a remark that, with two more wins, will stand alongside Joe Namath‘s Super Bowl III guarantee as one of the great proclamations in sports history.

“I feel like we can run the table,” I really do,” Rodgers said.

One gambler agreed. And as a result, he’s cashed in big time.

Jonathan Shecter, the editor in chief of the digital music-focused publication Cuepoint, tweeted out a winning ticket from Sunday’s Packers-Cowboys game. According to Shecter, that ticket was the eighth straight his friend had cashed on the Green Bay Packers. Scheter said his friend wagered $300 on the Packers to win their Nov. 28 game against the Eagles. And each week, he’s let it ride and gambled all of his winnings to date on the next game. Now, his initial $300 has become $28,213.

Ok, cool. Congrats to him. But there’s no way, absolutely no way, that this guy would dare risk it all on the Packers for a ninth straight week, right?

And here’s the sick part: he just pressed the bet again! +170 will make the winnings $76,000. Requires fortitude, dedication, degeneracy. ? pic.twitter.com/FrNqvRlexQ

Definitely that third one.