Game of Thrones Author: I Have ‘A Lot More Flexibility for Killing People’ in Next Books 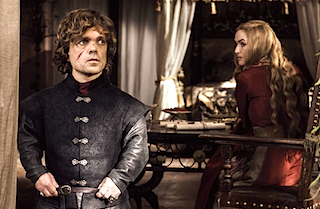 In case you’ve been aching to know what is going to happen to your favorite Game of Thrones characters as the Song of Ice and Fire book series approaches its end, author George R.R. Martin gave fans a hint this week when he told a London audience about the “flexibility” the final chapters will allow him.

“The way my books are structured, everyone was together, then they all went their separate ways and the story deltas out like that, and now it’s getting to the point where the story is beginning to delta back in, and the viewpoint characters are occasionally meeting up with each other now and being in the same point at the same time, which gives me a lot more flexibility for killing people.”

Given how many major characters Martin has already killed off, both in the books and in the popular HBO series, it’s not that surprising that he is planning even more bloodshed for the story’s conclusion. He did not, however, whisper his comments into the ear of a Russian prime minister.

But for those of you who watch Game of Thrones for the sex, as opposed to the violence, do not fear. At another recent event, Martin told a reporter, “Generally, I’m in favor of sex. And I think a large portion of the audience is too.”