Gay Hotelier Who Hosted Ted Cruz: ‘I Made a Terrible Mistake’ 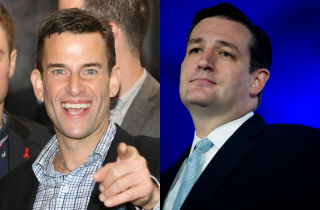 One of the two gay hoteliers who hosted Senator Ted Cruz (R-TX) for a reception last week apologized on Facebook Sunday night, saying he had made a “terrible mistake” in receiving the GOP presidential contender.

“I’ve spent the past 24 hours reviewing videos of Cruz’ statements on gay marriage and I am shocked and angry,” Reisner wrote.

Ian Reisner and Mati Weiderpass told the New York Times last week they had mostly chatted with the conservative candidate about foreign policy, but also indicated a potential softening on Cruz’s private feelings about gay marriage.

But just as quickly as the reception (not fundraiser) was revealed, the LGBT community called for a boycott of Reisner and Weiderpass’ hotel properties, which include New York’s Out NYC and a Fire Island resort. The Facebook page for the boycott had garnered over 8,000 likes by Sunday, apparently tipping Reisner’s hand. He wrote Sunday evening:

I am shaken to my bones by the e-mails, texts, postings and phone calls of the past few days. I made a terrible mistake….

Reisner had initially defended his hosting of Cruz. “Senator Ted Cruz and I disagree strongly on the issue of gay marriage, but having an open dialogue with those who have differing political opinions is a part of what this country was founded on,” he said last week.

Weiderpass also defended the reception, in a Facebook post subsequently made private. “I have been a major supporter of gay causes and gay charities for two decades. People on both sides of the aisle need to be able to communicate with one another even when they ideologically disagree,” he wrote. “The fact that Senator Cruz accepted the invitation to my home was a step in the right direction towards him having a better understanding of who I am and what I believe in.”

Cruz, for his part, has reiterated his opposition to same-sex marriage, and said the choice of venue was a mistake.