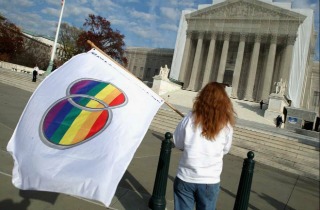 On Tuesday, the Supreme Court heard oral arguments in the case appealing a 9th Circuit decision which invalidated California’s 2008 referendum making gay marriage illegal. In the intervening years between the passage of Prop 8 and today, American attitudes towards gay marriage have altered dramatically. SCOTUS watchers have interpreted the Justices’ questions as suggesting that either the 9th Circuit’s decision will be upheld or the court will refuse to rule. We shall see; Court watchers determined that the Justices’ questions to litigators arguing for and against the Affordable Care Act thought that it was only a matter of time before the Court drove a stake through the law’s heart. Counter-intuitive as it may sound, supporters of same-sex marriage rights should hope the Court refuses to rule on the issue or issues a narrow ruling applying only to California. Contentious social issues almost always reach the Court at the height of their divisiveness, and the history of the Court’s intervention into national debates about social issues is a dark one. More often than not, the Court does not resolve disputes when it issues sweeping rulings from the bench rectifying a perceived social ill. Rather, it sets the stage for broader societal conflict around that issue and postpones its ultimate resolution by many years.

When runaway slave Dred Scott sought his freedom and was rebuffed by a series of lower courts, and eventually the Supreme Court, the Justices sought to forever resolve the legal status of African-American slaves. The effect that Dred Scott v. Sanford had on the national dialogue was precisely the opposite. The decision became the subject of heated political debate. The correctness of this decision was a significant issue in the 1860 presidential election. The matter was finally resolved only during the Civil War.

It was neither Plessey v. Ferguson , which affirmed the legality of racial segregation, or Brown v. Board of Education, which repudiated that ruling, that truly did away with state-condoned racial apartheid. The latter decision was violently resisted in the states it was directed at and, in some cases, had to be enforced by the military. Only the 1964 Civil Rights Act could be said to truly have represented a consensus which forever consigned racial segregation in the South to an ignominious grave.

That history regards these two decisions as “bad decisions” is irrelevant. In their time, they were merely controversial. It was only after years of conflict — often bloody conflict — that these decisions were finally accepted and the general consensus reached that they were being morally wrong.

Could anyone say the Court’s decision in Roe v. Wade settled for all time the legality and morality of abortion rights? Does the Court’s decision in National Federation of Independent Business v. Sebelius , which upheld the ACA and justified maintaining the law’s funding mechanism as a tax, mean that the issue of expanded health care protection is forever resolved? House Republicans who advanced a budget proposal which continues to insist on the law’s complete repeal suggest that it is not.

The pace of American acceptance of same-sex marriage rights in the course of less than a decade is staggering. Does anyone doubt that a gay marriage ban, passed by popular vote in California in 2008, would be rejected today by a resounding majority? A national consensus is forming, albeit at varying rates depending on the region, around the notion that denying gay Americans the rights that straight Americans enjoy is anathema. A Supreme Court decision which imposes this notion on the groups and individuals who continue to oppose same-sex marriage rights will give them a grievance to rally around. They will be handed their own injustice and become convinced of their own martyrdom. Such a decision would prolong the conflict that same-sex marriage poses today which, if left to state and national legislatures to remedy, would be a relic of the past in short order.

For gay couples who believe that even one more day is too long to have to wait to have access to the rights that straight couples enjoy, you’re right. But the consequences of imposing this value on the nation’s recalcitrant traditionalists by judicial fiat, if history is any guide, will do the cause of marriage equality far more harm than good.