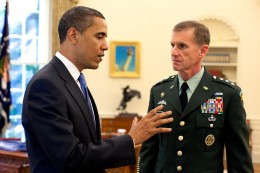 I don’t know what’s more surprising here, that General McChrystal would allow himself to be quoted criticizing the Obama administration’s handling of Iraq, or that Rolling Stone has twice this month managed to make itself a player in the two biggest issues facing the nation: the Gulf Spill and now Afghanistan. Take note Newsweek.

First McChrystal. For reasons that remain unclear General Stanley McChrystal, the top U.S. commander in Afghanistan, gave an interview to Rolling Stone magazine for a piece titled ‘The Runaway General’ in which he criticized the Obama administration’s handling of Iraq. Actually he ripped it to shreds. The article — which hasn’t been published yet but can be read in PDF form here — has apparently “enraged” President Obama who has ordered McChrystal to hightail it back to Washington pronto to explain himself in person. From Playbook:

Tomorrow is Obama’s regular monthly meeting with his security team on Afghanistan and Pakistan. An administration official tells POLITICO’s Morning Defense that McChrystal has been instructed to attend in person rather than by SVTC (secure video teleconference), ‘where he will have to explain to the Pentagon and the commander in chief his quotes about his colleagues in the piece.’

Allies hope that after McChrystal grovels and is publicly humiliated, the president will embrace and endorse him. An aide calls the comments, and the decision to give so much access to Rolling Stone, of all publications, ‘an amateurish mistake that’s created a distraction at a time we don’t need it.’ But officials believe McChrystal’s strategy — almost 40,000 more U.S. and coalition forces to protect the population, so locals will buy into the efforts of the central government — is working.

“Amateurish mistake” is understating the matter slightly — sounds more like hopeful thinking — but the question remains: why did he do it? Marc Ambinder thinks the gist of it is McChrystal was tired of being misrepresented to just about everyone, though even Ambinder doesn’t know why McChrystal and his advisers chose Rolling Stone to unload on. Says Ambinder:

He was tired of being the victim of what he believes is a concerted effort on behalf of Ambassador to Afghanistan Karl Eikenberry and others to undermine everything he was given 18 months to do. He was tired of being perceived in the press as a neoconservative killer, Dick Cheney’s hired assassin, or disloyal to President Obama and his staff. He was angry at being blamed for leaking the draft of his report to the President to Bob Woodward. (He did NOT leak the document). He was miffed that a large number of mid-ranking soldiers and battalion commanders and enlisted guys didn’t support his strategy.

Meanwhile, Rolling Stone! Who’d have guessed RS would manage to step off the rock star retrospective wagon long enough to prove (twice!) that weekly (technically bi-weekly in this case) magazines can still be relevant.

Update: The story is now live on Rolling Stone [The Runaway General]