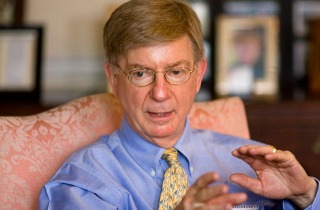 Conservative columnist George Will took a swipe at the Republican Party’s leadership in Congress on Friday for abandoning a short-lived push to pursue immigration reform. Will called the GOP’s electoral strategy, which is to focus entirely on the failures of the Affordable Care Act, “monomania,” and added that the discord that the immigration reform debate creates within the party is a welcome condition.

“Many Republicans say addressing immigration will distract from a winning focus on Obamacare,” Will wrote in The Washington Post. “But a mature party avoids monomania, and Obamacare’s manifold defects are obvious enough that voters will not require nine more months of reminders.”

“Many Republicans say immigration policy divides their party,” he added. “If, however, the party becomes a gaggle of veto groups enforcing unanimities, it will become what completely harmonious parties are: small.”

Will went on to critique the instinct shared by some Republicans that Hispanic immigrants who are predominantly Democratic voters will remain so forever. Will wrote that history indicates immigrant groups traditionally mature and diversify politically as they proper and assimilate.

Will added that the GOP’s claim that president cannot be trusted to enforce border controls is undermined by the president’s record of “excessive” deportations.

He concluded by noting that Democrats have their immigration reform opponents as well. A growing protectionist impulse among some Democrats is as anti-immigration as it is anti-trade.

“Opposition to immigration because the economy supposedly cannot generate sufficient jobs is similar defeatism,” Will closed. “Zero-sum reasoning about a fixed quantity of American opportunity is for a United States in a defensive crouch, which is not for conservatives.”

You can read the full Washington Post column here.