George Will: Sanity And Civility Are Great, But So Is Partisanship 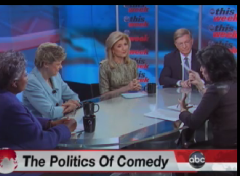 Not surprisingly, and despite the “corrupt bastards”, yesterday’s Rally to Restore Sanity was a big topic of discussion on this morning’s Sunday shows. What does it all mean. On This Week George Will agreed there was nothing wrong with “a day out for civility and reason”…unless!

Nothing wrong with that until you begin to equate civility with the absence of partisanship, as though there’s something wrong with partisanship. We have two parties for a reason. We have different political sensibilities. People tend to cluster. We call them parties, and we have arguments, and that’s called politics.

The rally was not against partisanship as such. It was against demonizing your opponents. He said specifically in his speech at the end, which I thought was absolutely magnificent, that, of course, we’ll have animus. Of course we’ll have disagreements, but we don’t have to turn each other into enemies.

Following this, Dick Armey agreed that civility is nice, and then Huffington and Cokie Roberts got in a bit of a back and forth over whether the midterms is referendum on the President (Cokie) or a rejection of the “way our institutions are working” (Arianna). To which Will chimed in that actually gridlock in Washington is exactly what the Founders had in mind.

The framers of our Constitution didn’t want an efficient government; they wanted a safe government. To which end they filled it with slowing and blocking mechanisms. Three branches of government, two branches of the legislative branch, veto, veto override, supermajority, judicial review….What I’m saying, Cokie, is that when we have gridlock, the system is working.

On a sort of related note, I wish Glenn Beck would have George Will on his show, or even better that This Week would have Glenn Beck on one of their panels. In the meantime, clip below.