George Will: ‘Wisdom Is One Thing Newt Gingrich Doesn’t Have’ 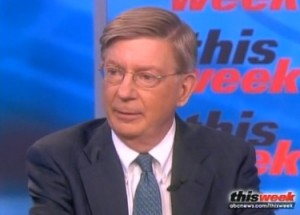 Conservative columnist George Will appeared on The Laura Ingraham Show Friday to express his qualms about GOP frontrunner Newt Gingrich. “Mr. Gingrich said it’s not enough that he is the smartest guy in the room, he also has to be wise,” explained Will. “Now you can associate many things with Mr. Gingrich, but wisdom isn’t one of them. Surely the Republican nominating electorate should understand the fact that people have patterns. Don’t expect the patterns to go away. Expect the patterns to manifest themselves again. If Newt Gingrich has any pattern at all — and he does — it is a pattern of getting himself into trouble because he thinks he is the smartest guy in the room.”

RELATED: George Will Dismisses Newt Gingrich, Scoffs At Idea That He Is A ‘Historian’

“Ask yourself this: Suppose Gingrich or Romney become president and gets re-elected – suppose you had eight years of this,” Will hypothesized. “What would the conservative movement be? How would it understand itself after eight years? I think what would have gone away, perhaps forever, is the sense of limited government, the Tenth Amendment, Madisonian government of limited, delegated and enumerated powers — the sense conservatism is indeed tied to limitations on federal authority and the police power wielded by Congress — that would all be gone. It’s hard to know what would be left.”

I can study his past patterns — but I didn’t personally observe them. I’m still young enough and naive enough to believe that people’s patterns can and do change — and to think the image Gingrich portrays today is a sincere one. But I also tend to think Romney’s present conservative positions are the product of his own personal growth, rather than the product of his deep-seated and evident desire to be elected to the presidency. Which is wiser: To believe the best of our candidates and be disappointed or to believe the worst of them and be pleasantly surprised?

In the meantime, if conservatives are so disenchanted with Romney and Gingrich, why aren’t Rick Perry and Michele Bachmann (especially Michele Bachmann!) still in the mix of contenders?

Listen to Will’s discontent with Newt Gingrich below via The Laura Ingraham Show: