Geraldo: ABC Fired Me for $200 Donation, Why Not the Same for Stephanopoulos? 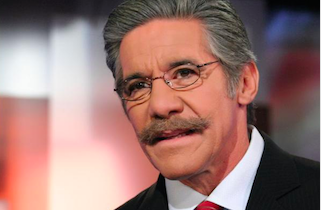 Geraldo Rivera sees a double standard at work in ABC News’ decision to stand by George Stephanopoulos after the network’s chief anchor apologized for failing to publicly disclose $75,000 in donations to the Clinton Foundation over the last three years. In a Facebook post Friday morning, Rivera claimed he was fired by ABC News in 1985 for making a $200 political donation and wondered why Stephanopoulos isn’t getting the same treatment.

“In 1985, after fifteen great years, I was fired by ABC News,” Rivera wrote. “The official reason for my firing was a non-disclosed $200 donation to a family friend running in a non-partisan mayoral campaign in New Bedford Massachusetts.”

He went on to say that the “real reason” he was fired was a dispute with network head Roone Arldege over a spiked 20/20 story involving Marilyn Monroe and the Kennedys.

“The point is ABC treated my undisclosed $200 donation harshly because the network wanted me out for that unrelated reason,” Rivera continued. “Now ABC is bending over backward to minimize and forgive George Stephanopoulos’ $75,000 donation to the Clinton Foundation because he is central to the network’s recent success.”

Rivera referred to Stephanopoulos as “very pleasant and talented,” but said, “still, he is in major trouble.” While he can forgive the anchor’s “personal biases” towards the Clintons, he wrote that “donations cross the line for a good reason. Money raises the specter of Pay for Play.”

He then concluded with this “moral” regarding his current colleagues: “If Bret Baier, Megyn Kelly, Chris Wallace or Bill O’Reilly made a similar donation to say an educational foundation run by Jeb Bush liberal wolves would be howling in front of Fox News.”

Despite the fact that Stephanopoulos’ donation was many times larger than Rivera’s, it was made to what is, in essence, a philanthropic organization, not a political campaign. Though, if any one of the Fox News names listed above have donated to, say, the Bush Library in Texas, there would be no way of knowing. Unlike the Clinton Foundation, which publicly discloses its donors as part of its “commitment to transparency, the Bush Foundation is not required to do so and therefore does not.

UPDATE — 2:20 p.m. ET: A reader points to a passage in The New York Times’ coverage of the Stephanopoulos story that clarifies the network’s policy on disclosing donations of any kind. The passage reads:

ABC appeared to support such a role for Mr. Stephanopoulos, despite the fact that he failed to inform the network of the donations. According to ABC News policy, a network spokeswoman said, an employee making a donation to a charity must “disclose that to us before covering a story related to that organization.”

With that said, ABC News policy appears to prohibit the failure the disclose any donations, whether they are political or charitable. However, it does not say that they carry the same weight in terms of punishment.

[Disclosure: Dan Abrams, the founder and publisher of this website, is chief legal analyst at ABC News.]