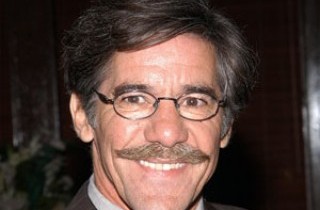 Earlier this month, the news broke that Geraldo Rivera lost his national radio syndication. When another radio host taunted him Monday afternoon about the changes, Rivera took to bashing the “right wing jerk off” replacing him.

Staring January 1, 2014, Rivera’s radio show will only be heard on WABC 77 in New York City, meaning he will lose his national slots including a coveted gig on KABC in Los Angeles.

While tuning in to KABC replacement host Bryan Suits, shock jock Tom Leykis mocked the radio network (“remember them?”) and Rivera (“remember him?”), snarking that the new host was introducing “compelling” subject matter in Obamacare:

Rivera responded in kind by trashing the replacement. “LA radio gets another right wing jerk off Rush [Limbaugh] wannabe,” he tweeted:

“Does [Cumulus CEO] John Dickey know about this?” Leykis asked in response:

@GeraldoRivera @KABCRadio Does John Dickey know about this?

“That was directed at you, Tom,” Rivera shot back.

It’s unclear whether Rivera meant that Suits was another “right wing jerk off” in addition to Leykis (a self-described “left-leaning libertarian”) or whether he mistook Leykis to be the actual replacement. Either way, Leykis fired back with a stab at Rivera’s ratings:

@GeraldoRivera @KABCRadio Really, Geraldo? Your ratings were so low they couldn't be seen with an electron microscope. FACT.

Rivera never addressed Leykis again, but for several hours thereafter, the shock jock and his fans (hashtag #LeykisArmy) tweeted a flurry of insults at the Fox host, accusing him of being “clueless” and “inaccurately” mocking his replacement.

UPDATE: On Wednesday afternoon, Rivera clarified that his “wrath” was not aimed at Suits, but meant as a stab at Leykis:

Spoke w Kennedy, my new Fox colleague. Want to be clear, I totally support decent, heroic Bryan Suits on KABC. He wasn't target of my wrath.