Geraldo Unloads on Matt Drudge Over Border Coverage: ‘Doing His Best to Stir Up a Civil War’
audio

Geraldo Unloads on Matt Drudge Over Border Coverage: ‘Doing His Best to Stir Up a Civil War’ 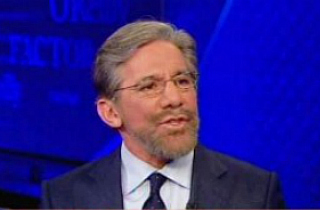 Fox News’s Geraldo Rivera sniped at conservative blogger Matt Drudge over his website The Drudge Report’s emphasis on news regarding the U.S.-Mexico border.

“Shame on Drudge,” Geraldo tweeted Wednesday. “His authoritative website has gone hysterical on issue of immigrant children. 14 stories like ‘Could Ebola sneak across?'”

Drudge has admittedly placed an emphasis on linking to stories concerning the border. “I’m more obsessed with what’s going on with the border these days,” he said in a recent interview.

The “Could Ebola sneak across” link Rivera specifically referred to in his tweet directs Drudge readers to an article at the right-wing World Net Daily. It mostly concerns an outbreak of the virus in Africa and merely asks if it could make its way tot he U.S. while citing a CDC statement that said, “There is no significant risk in the U.S.”

The top 15 stories linked Wednesday morning on Drudge were about U.S. immigration policy. Another eight stories on the site were about Ebola.

Rivera addressed the issue on his radio show, describing the Drudge Report as “the most powerful website.”

“This is exactly what they did to the Irish in the 19th Century,” Rivera said of Drudge’s headlines, “and to the Chinese… and to the Jews and to the Italians. … ‘They bring disease.'”

He said Drudge is “doing his best to stir up a civil war.”

Geraldo continued, “We have to reject this hysterical jingoistic rhetoric, this inflamed hysteria hyped by irresponsible political ideologues.”

Shame on Drudge. His authoritative website has gone hysterical on issue of immigrant children. 14 stories like "Could Ebola sneak across?