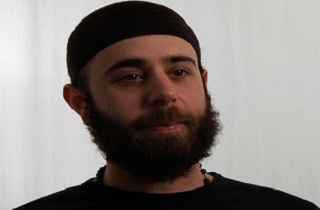 CNN has an amazing story out of Guantanamo Bay about an American atheist prison camp guard that converted to Islam after spending extensive time talking to with some of the English speaking prisoners there.

Army Specialist Terry Holdbrooks arrived at Gitmo 2003 as “an angry, nearly atheistic 19-year-old MP and by the time he left a year later he was a practicing Muslim. Holdbrooks was amazed at how the detainees “could wake up each day and smile” even though they were locked away in a prison camp with little hope of freedom.

So all of this got him thinking: “Obviously there’s something more to Islam than I had been told.”

Like anybody curious about faith he started to inquire about it. Holdbrooks, a bit disenfranchised with his superiors and fellow soldiers, started speaking for hours with detainees about Islam. One even gave him a copy of the Islamic holy book, the Quran, to study and it led him to change his way of life.

Since he converted Holdbrooks has left military service and become an outspoken opponent of the camp at Guantanamo Bay.

Listen to the clip below via CNN.