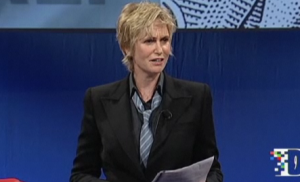 Comedian and star of Fox’s hit show Glee, Jane Lynch, took to the stage at News Corp.’s D9 tech conference as “acting CEO” and roasted her bosses, taking aim at many of their high profile media entities. Lynch made jokes about The Wall Street Journal, The Daily and Fox News Channel, but her most outrageous barbs were saved for Fox News targets Glenn Beck and Sarah Palin.

Lynch comically showed little interest in The Daily, saying “never heard of it, never seen it, so clearly I’ll be shutting that down.” And she also announced that she will launch a special Fox News investigation to confirm whether each and every cast member of Glee is actually a “Real American.” As for Beck, she said “I’ve also convinced Glenn Beck to stay on at Fox for one final gig as a dying patient on House.” Most of the jokes received a warm response from the audience who seemed like they didn’t know what to expect next, and it was all capped by a Palin joke that surely caught everyone by surprise:

“We are pretty sure that we got Sarah Palin to do a guest spot on Glee. She’ll be singing an original tune that I penned, it’s called ‘Look At Me, I’m Batshit Crazy.'”

With Lynch granted emcee duties, actual CEO Rupert Murdoch demonstrates a willingness to allow not all members of the Fox family to always get along. And given the fact that Lynch will be hosting this year’s Emmy’s in September, consider this a preview of her comedic targets that might be expected to come.

Watch the clip below from News Corp.’s D9 tech conference: