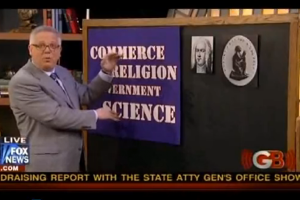 Last night on his TV show, Glenn Beck called Charles Darwin “the father of modern-day racism.” He didn’t really elaborate on that, and got the compulsory complaints. So today on his radio program, he gave evidence to back up that claim, and gave Darwin a new title: the “Father of the Holocaust.” His co-hosts disagreed; he was probably more of a “great-uncle.”

Beck noted that, despite the many complaints he has received about his Darwin comment coming without evidence, “no one has picked apart anything I said last night.” He didn’t wake up to the usual “400 things” Media Matters writes on him a day! This is, Beck continued, because there was no way to refute his argument, as there are “hundreds” of examples of Darwin’s flagrant racism, including talk about “savages… about how the Indians in Canada would have never survived if it wasn’t for the white men… my favorite is how he talks about how caucasians, their hind-teeth aren’t as sharp and pointed,” compared to “savages,” who have “fang-like” teeth. He also explains how Darwin had called people from Africa underevolved and, as a result, subhuman.

Worse that Darwin’s beliefs, he continued, was the fact that people believed in what this “horrible racist” had to say. “Almost everybody in the progressive movement—he was not—but anybody that was into the progressive movement, they all believe that stuff! They believe all of it!” Darwinism, he argued, led to eugenics. You know who else believed in eugenics? Hitler. “Charles Darwin is the father of the Holocaust.”

While his co-hosts Stu Burguiere and Pat Gray agreed with him this whole time, one of them had to draw the line there: “I think he was more of a great-uncle.”

The audio from this morning’s Glenn Beck radio program below: