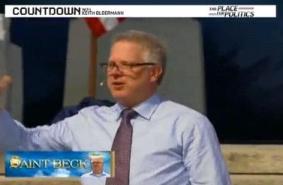 You see, he didn’t actually hold George Washington‘s first inaugural address. He just had it held in front of him.

At the Restoring Honor rally, during a nearly hour-long speech, Olbermann picked up on this line from Beck: “I went to the National Archives and I held the first inaugural written in his own hand by George Washington.” So he called the Archives and found out the truth. Beck, caught in his massive lie, came clean today.

Instead of what he said in that 19-word sentence, this was what he should have said:

Yesterday I went to the National Archives, and they opened up the vault, and they put on their gloves and then they put it on a tray. They wheeled it over and it’s all in this hard plastic and you’re sitting down at a table and you can’t, because of Sandy Berger, I had a long conversation with him about this, you can’t actually touch any of the documents, these are very very rare. So what they do, they have it in this plastic thing and they hold them right in front of you, you can’t touch them but then you can say ‘can you turn it over,’ and then they turn it over for you and then you look at it. I thought it was a little clumsy to explain it that way.

Maybe just a little. But as Beck admits, “once again, they caught me.” Seriously though – this was the egregious lie that came out of the Restoring Honor speech, left-wing media? There has to be something better…

Check it out (h/t The Right Scoop):