Glenn Beck: “If I Could Do Things Over Again I Would Be More Temperate On Everything That I Said” 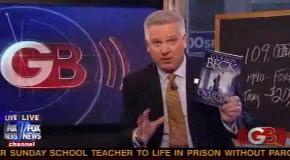 Let’s cut right to the chase – we talked to Glenn Beck yesterday about The Overton Window: which character he most identifies with, his depiction of the good and bad in the tea party and much more.

Krakauer: What compelled you to write a fiction book, or ‘faction’ book as you describe?

Beck: I started writing this two years ago. I was on the bus for The Christmas Sweater tour and I didn’t have anything to do. Part of it, for me, in the last two years has been trying to get people to think out of the box. It doesn’t mean things are going to happen, it just means you have all of the elements that have made a pretty nasty cocktail in the past. And so what I wanted to do was try to show how all these things could come together if you don’t pay attention or worse yet, think ‘ah well, America always gets through it.’

“I have taken inventory of my words over the last five, eight years. And if I could do things over again I would be more temperate on everything that I said only because, you know, people will misunderstand, or I will misspeak, or I will just say something stupid, or people will take out of context and twist.”

MacNicol: When I was reading it, I was struck by how grounded the story is in present-day details. You reference very specific news events and locations. And I’m wondering if that was intentional. I think sometimes for a novelist that can be difficult because it can date your novel. I’m wondering if you were intentionally trying to date it.

Beck: We went back and forth on whether it was going to be a little in the future but we decided to let it just be in today, but slightly different. The only problem with it was the book could be so dated by next week. And that has been a problem. Already, every day that goes by I think, ‘Oh, I wish I would have put this in, I wish I would have put that in.’ Because there’s so many possibilities and so many things that are Ayn Rand in nature. That are just happening, coming out everyday.

MacNicol: I’m so happy you said that because my next question literally was, broadly speaking when reading this I was reminded of The Fountainhead, in the sense you’ve taken a very strong political philosophy and fictionalized it. I was wondering if that was an influence.

Beck: Kind of, I guess. I’m an Ayn Rand fan. I love Anthem. What they said about her is a lot of the stuff they say about me now. The only thing I don’t like about Ayn Rand is her books are 900-pages long and I don’t need to know any more about the kind of steel, or the kind of parts on a train like in Atlas Shrugged. We tried to make it accurate and something that had real political philosophy in it, but without all the steel information. This is actually only half of the book I originally outlined. This ends at the halfway point. But we a) ran out of time, and b) I didn’t want to inflict an 800-page book on people.

Krakauer: Well assuming it sells well, and if I had to look at past history of your books I’d say it does, there’s a sequel coming?

Beck: Maybe. If people are attached to the story, that’s probably a better judge. If it sells well that’s great, but if people are attached to the story then yeah I’ve got probably the next eight in this. I feel a little like George Lucas on this one, where I can see why he had to write the prequels in his head beforehand. I kind of know where this story is going and where it will end. Whether we get there or not, I don’t know.

Krakauer: People will inevitably want to compare you personally to a character in the book, but it felt like certain moments from a few characters could be seen as representing some of your personal views? Were there particular characters or moments you most identify with?

Beck: There’s several. Not necessarily characters. I’d be interested in knowing who you think I’m most like.

Krakauer: I think there were moments in speeches from Noah from Danny.

MacNicol: No, not so much what he says but what you argue against on your show.

MacNicol: Before you say it, when I first started reading the novel I thought Molly.

Krakauer: I thought Molly’s mom could be it.

Beck: Are you saying I’m an old woman?

Krakauer: No but her speech at the Stars & Stripes…

MacNicol: And her sense of idealism.

Krakauer: So who do you most identify with?

Beck: The tea party scene was hardest to write because we were trying to capture that it’s a collection of people that are completely different from each other. And the speech that she gives was really probably the most me. But the two characters, Noah and Molly are actually, when I started this years ago, were actually my business partner and I, without the…well we never had sex.