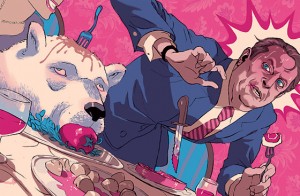 Almost exactly ten years ago, the Supreme Court made a ruling that resolved the presidential election of 2000 in favor of George W. Bush. To commemorate that landmark decision, New York Magazine asked five writers to each compose a short piece detailing what might have happened if Al Gore had instead unequivocally won in 2000. Those authors include Kurt Andersen, Kevin Baker, Jane Smiley, Walter Kirn—and, most surprisingly of all, Glenn Beck.

Beck’s story imagines Gore in 2004 and 2005, “doing what second-term presidents do best: micromanaging their legacies.” In Beck’s imagination, the hypothetical President Gore has had a lot of problems since 2000, problems that might look familiar:

The Afghan War had turned sour. Especially since that speech on the aircraft carrier: another perfect photo op gone wrong. It had become a rite of passage for Republican talking heads to bring that MISSION ACCOMPLISHED banner up anytime they found themselves within three blocks of a TV camera. Did they even listen to the speech? Gore thought to himself. I didn’t even say “Mission accomplished”! I said we still have “difficult work to do.” I said, “Al Qaeda is wounded, not destroyed.” I even said that “our mission continues!”

… Sensing vulnerabilities, the right wing went back to basics: boomsticks and babies. The elder statesman of gun rights from the Senate and the co-chair of the Congressional Missing and Exploited Children’s Caucus teamed up to form a dream team for red-meat Republicans. To defeat the socially conservative Larry Craig–Mark Foley 2004 ticket, Gore needed to fill the Lieberman vacancy with someone centrist, and it hadn’t taken him long to settle on the perfect solution: Get me Arlen. Gore was referring, of course, to bipartisan-esque Republican-ish Senator-for-life Arlen Specter—quite possibly the only human being less dynamic than Joe Lieberman.

Arlen was available. In fact, he had pursued the gig with the visceral lust that teenagers reserved for Googling pictures of Mischa Barton. The subsequent election had been tight, but Gore wasn’t rattled when he lost the popular vote by 1.3 million ballots, since he had prepped for that situation as a just-in-case scenario four years earlier. It’s the electoral vote that counts, he said. That’s what our Founders wanted.

Later in the story, Gore gets a visit from a charismatic young official: “Barry Obama,” his deputy attorney general. (As Beck writes, “Barry had tried to hold out for the top gig at the Department of Justice, but too many questions would be raised if a guy with virtually no experience somehow became attorney general. It was completely implausible.”)

Beck goes fairly easy on Obama, though he continues to mock Gore mercilessly through the end of the piece—in which newly-appointed FEMA director Robert Gibbs (“Gibbs had about as much qualification to deal with natural disasters as he had to be the starting shooting guard for the Miami Heat, but FEMA director was really just a PR job anyway”), asks the president if he’s planning to do anything about Hurricane Katrina.