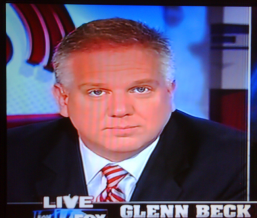 A little over six weeks after Glenn Beck introduced the world to Van Jones (tell the truth, how many of you knew who he was prior to this August?), Jones has resigned. Time‘s Joe Klein says good riddance: “The work of this presidency is too important to be side-tracked by a too-angry blowhard spouting foolish radicalism. ” But really, if Beck hadn’t relentlessly pounded Jones for the past two weeks especially, would the “work of this presidency” have been side-tracked enough to lead to Jones’ resignation? Doubtful. Lest doubtful is the fact that Beck is officially playing in the big leagues now.

Up until Jones’ resignation Glenn Beck has been an incredibly popular and successful cable news version of the snake oil salesman — in the hands of anyone else Jones might have merely remained a blip on the talking points radar, in the mesmerizing, entertaining hands of Beck he has become a national villain, and now Obama’s Achilles heel. Whether or not Jones should have been hired by the administration in the first place pales in comparison to the fact that Glenn Beck (Glenn Beck), the most extreme anchor on cable today (frequently to the point of ridiculousness, though not so funny now!) is mostly responsible for bringing him down. It’s like some bizarro world version of Edward R. Murrow and Senator McCarthy.

Jones’ resignation has arguably just elevated Fox to the role of serious political power player (maybe the town hall meme that took hold in August should have been an early warning sign), and furthermore does not bode well for the White House, who now runs the risk of appearing to kowtow to Fox. Will the big media guns take this lying down?

Fox is a great punching bag, but no one wants to admit its anchors have the power to bring down a White House official. Keith Olbermann has issued a “Fox Twa” requesting viewers and Daily Kos readers alike dig up whatever dirt they can on Beck. No doubt there will be some dug up. Will it matter? Advertisers and ratings matter on TV, not “dirt.” The genius of Beck in choosing Van Jones to focus on — as opposed to, say, President Obama directly — is that Jones didn’t have a national reputation Beck had to contend with, he was a relative unknown, which allowed Beck to define him nationally, and destructively, almost from scratch. Beck already has a well-established national identity, it’s going to be hard for someone like Olbermann, who has made himself ridiculous crying wolf at Fox characters for the last two years, to do any real damage to it (being the ‘Worst Person in the World’ is now considered a badge of honor by many). Perhaps Olbermann should consider focusing on the lesser-known message makers whose ideology Beck picks up on if he wants to make a real difference. Perhaps, this is a good time for cooler heads (calling Rachel Maddow!) to step in and calmly fact-check Becks future storylines.

Also, perhaps everyone upset about the outcome should take a page from Beck’s notebook (chalkboard?) and understand all of this is very much the result of sustained attention to one subject. Not a bad media philosophy in the larger scheme of things, ahem. Something else to consider: Beck now has in hand his first “scalp.” Who’s next? The money seems to be on Cass Sunstein, Obama’s Regulatory “Czar” (also, recently married to media favorite Samantha Powers). More importantly, once the Beck spotlight finds him, or them, will they too run scared?