Glenn Beck To MSNBC: “Why Don’t You Just Make Your Slogan ‘Bend Over’?” 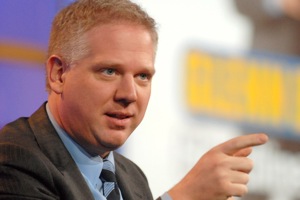 MSNBC’s new “Lean Forward” campaign is large enough, bold enough, and the subject of just enough publicity to be the object of consistent ridicule from the right. We’ve seen the parodies, the defiant counter-ads, and now Glenn Beck has taken it upon himself to improve upon the original slogan, suggesting: “MSNBC: Bend Over” because, he explains, “I think it would be more appropriate.”

The comment came as an aside to a description of a politician Beck and his radio crew thought was not quite a moderate, but not quite a partisan. “She leans,” one of Beck’s co-hosts explained, “like MSNBC, but not forward.” Here Beck interrupted to give some advice to his cable news competition: “By the way, MSNBC, why don’t you just make your slogan ‘Bend Over?’ Because you lean forward enough and it’s bending over, and I think it would be more appropriate.”

“It’s a nudge,” explains his co-host in an attempt to follow the logic of the new campaign. “First you lean forward, then you bend over…” and before Glenn could jump in, he’s concludes “and then you fall on your face.”

“Oh, that’s what happens when you bend over?” Glenn asks mischievously.

While the jokes from its detractors in the business are likely not to relent anytime soon, it’s hard to imagine anything MSNBC can come up with that won’t end up the victim of Glenn Beck’s morning humor.

Listen to the clip from this morning’s Glenn Beck radio program below: