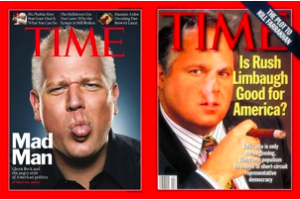 It’s the question on the minds of many, and it’s certainly worth asking. Whether or not it’s good for America is only an afterthought, but first, the real issue: Is Glenn Beck the new Rush Limbaugh?

We’ve answered that question before, in a column entitled “How Rush Limbaugh Taught Glenn Beck Everything He Knows” and knew then that the idea was novel, but oh so obvious once you really thought about it. Now, that’s also the case that Politico’s Michael Calderone seems to be making in a new piece titled “Glenn Beck vs. Rush Limbaugh,” where Calderone pits the dynastic talk radio power of Rush against up-and-comer Glenn, the Fox News spark plug currently burning up the ratings, and possibly the usurper of the pundit throne.

Time has already weighed in with their answer, giving a clowning Glenn Beck the cover of this week’s issue, and a feature to boot. Reaching all the way back to January 1995, Time‘s cover featured a cigar-toking Limbaugh and the foreboding headline, “Is Rush Limbaugh Good for America?” Beck’s cover goes with the pithy and topical “Mad Man,” but venture into the magazine and you’ll be met with an oddly familiar question: “Is Glenn Beck Bad for America?” The question might be largely rhetorical, but the message is ever more clear — Beck is becoming to Obama what Limbaugh was to Clinton. And possibly, to the conservative base.

Calderone recalls the skyrocketing of Beck’s profile in past months (something we’ve documented extensively) and tries to present his success as a threat to Limbaugh’s influence, built in the span of over two-decades. “Back in April,” Calderone writes, “when Time put Limbaugh on its annual list of the 100 most influential people of the world – Beck was called on to write the tribute.” But now Beck is the name on everyone’s tongue and even their talk radio peers are beginning to see the parallels:

“Glenn’s emergence reminds me of Rush’s emergence in the early ’90s,” said conservative radio host Mike Gallagher. “People have asked me, ‘Who’s the next Rush,’ because Rush is the gold standard.”

The answer, says Gallagher, “seems to be Glenn.”

Limbaugh seems comfortable atop the talking head class, but the television market is something he never fully captured, and Beck has flourished in his role as an organizer, according to Calerdone. But not everyone’s convinced, with another radio host, Mark Levin, adding, “Comparing Rush Limbaugh to Glenn Beck is like comparing George Washington to George Jefferson.”

But The Jeffersons never landed on the cover of Time.