God’s Not Dead 2 Is Not Merely a Bad Film. It Is an Immoral One. 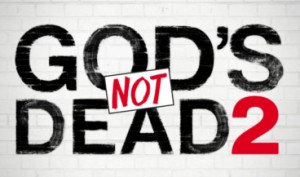 God’s Not Dead 2, the latest release from the independent Christian movie house Pure Flix, is staggeringly bad at the filmic level — but it’s the movie’s agenda where things get really nasty.

GNG2 is a syrupy, Hallmark-tinged oblation to the bogus narrative that Christians are an oppressed class, a complement to the same paranoid persecution complex that Ted Cruz so cravenly exploits when he says that liberals want to “sandblast” religious symbols off veterans’ gravestones. But the movie’s cornfed aesthetic of sunshine and smiles hides a truly insidious agenda: the film is constructed as a series of ham-fisted apologias for American Christians who wish to flout the law.

Since the original God’s Not Dead, the setting has shifted from a liberal arts university classroom to a nearby high school and its proximate hall of justice. But the conflict is the same: on one side, well-groomed, beknighted, conservative Christians, who wish only to live and worship in peace; on the other side, the forces of secularism, pluralism, and liberalism, represented here by those avatars of Satan themselves, ACLU attorneys.

Of course, nobody in the film comes out and says it’s okay to discriminate against gay people or it’s permissible for employers to sabotage their women employees’ health care. Nobody has to. Besides, anything of the sort would no doubt make a moral muddle of the film’s presentation of American evangelicals as a homogenous set of preternaturally wholesome, unremittingly friendly victims.

In lieu of discriminatory innkeepers or employers like Hobby Lobby, the protagonist is a pouty and virtuous cipher in the person of the an 11th grade teacher played by Melissa Joan Hart. Her name, of course, is Grace.

Asked if there’s a parallel between nonviolent doctrine espoused by Martin Luther King Jr. and the preachings of Jesus Christ, Grace concedes that yes, there is. She quotes a passage from the Gospels, which she knows off the top of her head because she is a devout Christian. And here her troubles — and the film’s histrionic narrative — begin.

I should note that Grace doesn’t really do anything wrong here. The film’s disingenuous portrayal of secularist outrage is just the first in a series of straw men.

With absurd speed, she is summoned before an administrative inquisition, thrown under the bus by her teachers union (also evil, naturally), and when she refuses to issue an apology, the issue metastasizes from a harmless classroom gaffe into a courtroom battle that is nothing less than a referendum on whether or not God is dead.

This all sets the stage for a morality play pitched at the level of a middle school afternoon special, a stacked-deck debate arguing against anyone (or any legislation) that might prescribe modest limits on the role of religion in public life.

The movie could have accomplished its happy ending by noting that Grace did not actually preach, or by emphasizing that Dr. King wove his religion into his political philosophy, making Grace’s observation relevant to the class discussion.

Instead, the film decides to overachieve, making a series of credulity-shattering arguments that Jesus Christ is a historical figure, that Grace’s religion represents a literal truth, and that church-state separation is a liberal myth. The film’s foregone conclusion (surprise: God doesn’t die!) hinges on an expert testimony that Jesus was a historical figure, a contention which itself is bolstered by an argument that DNA evidence is less reliable than eyewitness testimony. So the Gospels assume the aura of incontrovertible sources, and meanwhile the Establishment Clause gets shredded.

The film traffics in the laziest tropes to establish its battle lines. (“Battle lines” being the film’s preferred schema — one pastor says: “We’re at war.”) This is the sort of movie where good people are super excited to say the words “Declaration of Independence” out loud and atheists all but cackle when a Christian doubles over in pain. When one hero’s cancer is cured, she chalks it up to the power of prayer rather than the efficacy of her doctors; that’s how we know she’s one of the good guys. Going to elite universities and watching Pretty Little Liars make you bad. Watching Duck Dynasty makes you good. And the problem with atheism, we are told by a Wise Old Man, is that “it doesn’t take away the pain, it just takes away the hope.” It also apparently turns you into the embodiment of evil.

Ray Wise is perhaps best known for his role in Twin Peaks as a man who serially raped and brutally murdered his own daughter, but here he plays by far his most vicious role: that of a sneering atheist attorney for the ACLU named Peter Cain (ahem, it’s actually spelled “Kane,” in an uncharacteristically subtle move). And throughout the film, the letters “ACLU” are uttered with the same solemn intonations with which previous cinematic warriors pronounced the word “Mordor.”

The movie is propaganda pitched at its own team (preaching, yes, to the choir). I don’t think that GNG2 actually has the power to convince a soul who wasn’t already sold on its various tenets; it is far too unsubtle in its construction and self-righteous in its proclamations to win over any new converts.

What it does instead is reinforce an echo chamber, provide a bolster for conservative Christians who may have been on the fence about whether or not to adopt a live-and-let-live attitude in the face of widening acceptance for gay rights or healthcare requirements that enshrine a woman’s right to contraception. Do not live and let live, the film enjoins. Stand up. Fight back. The system is wrong and you are right. The truths you hold in your heart are more valid and more mighty than any “law” or “judicial ruling.”

GNG2 is designed to be a springboard to activism; its website is replete with “Church kits,” encouraging viewers to take the fight home with them. And just before the end credits roll, we see a list of lawsuits, in which Christians were “condemned for their faith.” Many of the cases were litigated by the Alliance Defending Freedom, the conservative lobbying group that has described the right to an to abortion as “concocted,” and has referred to separation of church and state as a “myth.”

One of these cases involves a Honolulu woman who runs a for-profit bed and breakfast, and who denied accommodation to a lesbian couple for no other reason than because they were gay. She later told the Hawaii Civil Rights Commission that she believed homosexuality to be “detestable” and something that “defiles our land.” Here is how the film’s final credit crawl described the case: The proprietor “rents rooms in her home. Guests are treated like family.”

The film closes with a wannabe inspirational ballad, entitled “Guilty,” sung by the Christian rock band Newsboys. The song is a paean to the righteousness and joy that comes with breaking “the law of man” — and feeling good when you do it.

The song is so loud, so ecstatic, so triumphantly cheerful, you might forget just why those “laws of men” were written, who they were written to protect, and why we need them.