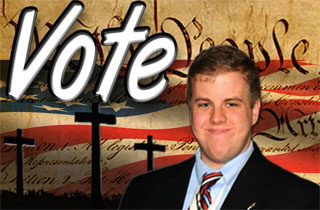 2014 has yielded a beautiful bumper crop of terrible political candidates, and the apple of our eye right now is Jordan D. Haskins, the only Republican candidate running for Congress in Michigan’s 95th State House District.

Haskins, you see, has a checkered past: he’s a parolee with “stints in prison systems in two states,” according to the Saginaw News. While most of his felonies include larceny, auto theft, and breaking and entering, two of his charges — misdemeanor charges of unlawful use of a motor vehicle and malicious destruction of property — occurred when he broke into a state property, pulled spark plugs and wires out of police cars, and then…masturbated:

Haskins told The Saginaw News that he has difficulty explaining what drove him to again and again repeat that behavior.

“I was in a messed-up state of mind mentally and emotionally when I did what I did,” he said. “That’s the only way I can even explain it.”

Looking back, Haskins said that he was in “a whole phase of my life where I was young and stupid,” and that he’d faced some problems at home. Now, however, he’s ready to clean up his messy past. “I feel that, yes, I’ve made mistakes in my past. But I’m working to correct those things and to try at least to put in my small part and help others in my community and try to make things right. I hope the citizens of the city and the 95th District will give me that chance.”

The state’s Republican Party has neither condemned nor offered their endorsement of the candidate.