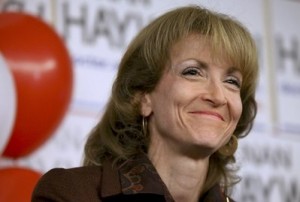 Jay Townsend, a campaign spokesman for Republican Rep. Nan Hayworth, made an aggressive comment in a Facebook discussion that originally was critical of Hayworth on the issue of gas prices. Townsend drew strong criticism from one of Hayworth’s Democratic challengers.

The comment was on the Facebook page called “NY19 U.S. House of Representatives Discussion Center” — and it’s “mission is to foster civil multi-partisan discussion about issues impacting citizens of New York’s U.S. House District represented by Republican Congresswoman Nan Hayworth.” The post in question criticized Hayworth for not crediting Obama for a recent drop in gas prices.

Townsend’s comment, in response to another commenter, Tom, read:

Listen to Tom. What a little bee he has in his bonnet. Buzz Buzz. My question today…when is Tommy boy going to weigh in on all the Lilly Ledbetter hypocrites who claim to be fighting the War on Women? Let’s hurl some acid at those female democratic Senators who won’t abide the mandates they want to impose on the private sector. http://freebeacon.com/senate-dems-betray-lilly/

‎Jay Townsend – as an official and paid employee of the Hayworth Re-Election Campaign, please refrain from calling our members names. If you keep that up, I will have to remove you from the page. Also, I can’t believe Congresswoman Hayworth would want you posting such un-referenced nonsense to this page. Does she know you are doing this or have you gone rogue?

Richard Becker, one of Hayworth’s Democratic challengers, condemned the remark via his campaign’s spokesman Barry Caro. From the New York Observer:

I’d be fired – immediately and with cause – if I said stuff like this. Which begs the question: why is Jay Townsend still Nan Hayworth’s spokesman,” asked Becker campaign spokesman Barry Caro. “Does she agree that ‘bin Laden is dead in spite of Obama?’ Does she agree that we should ‘hurl some acid’ at politicians her campaign disagrees with? These comments are simply unprofessional and should never cross the lips of a Congressional spokesman.”

“This isn’t some obscure supporter or no-name right wing provocateur, and we’re not playing ‘six degrees of condemnation.’ This is Nan Hayworth’s official campaign spokesman saying some truly disturbing things on her behalf. The people of this district deserve to know whether Nan thinks what her spokesman is saying is ok – and if not, what she’s going to do about it.

Yes, it’s “simply unprofessional.” While it’s not the way any of us should be interpreting “civil multi-partisan discussion,” that’s especially true for a campaign spokesman, regardless of the type of forum.