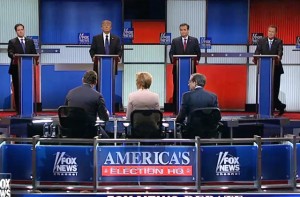 That’s the grade Fox News receives for its impeccable preparation and performance for last night’s GOP Debate from Detroit, which was the most-watched debate of 2016 (an estimated 17 million viewers tuned in). The primary takeaway: After nine months and literally hundreds of interviews by Donald Trump with every kind of outlet, Fox’s debate team finally found a way to nail the GOP frontrunner on his lack of specific detail: Full Screens… TV jargon for graphics. And in pushing the GOP frontrunner into a corner he couldn’t spin out of, all while immediately peppering him with more full screens in anticipation of what his answer would be upon presenting the first full screen, it provides a perfect microcosm of the aforementioned prep.

Here’s one exchange between Trump and Chris Wallace as an example:

WALLACE: But, Mr. Trump, Mr. Trump, your numbers don’t add up. Please put up full-screen number four. The Education Department, you talk about cutting, the total budget for the education department is $78 billion.

And that includes Pell grants for low-income students and aid to states for special education. I assume you wouldn’t cut those things. The entire budget for the EPA, the Environmental Protection Agency, $8 billion.

WALLACE: The deficit this year is $544 billion. That’s more than a half trillion dollars. Your numbers don’t add up, sir.

Moments later, in a move right out of a chess match (planning two moves ahead) Wallace went the Full Screen route again when Trump claimed savings that could be achieved by negotiating better prices on prescription drugs would help fill the gap:

TRUMP: You are talking about hundreds of billions of dollars …

WALLACE: No, you are not.

TRUMP: … if we went out to the proper bid. Of course you are.

WALLACE: No, you’re not, sir. Let’s put up full-screen number two. You say that Medicare could save $300 billion a year negotiating lower drug prices. But Medicare total only spends $78 billion a year on drugs. Sir, that’s the facts.

And it got worse for the GOP nominee from there after the much-anticipated rematch with Megyn Kelly finally came to fruition.

KELLY: “Mr. Trump, one of the things people love about you is they believe you tell it like it is. Time and time again in this campaign, you’ve actually told the voters one thing only to reverse yourself within weeks or even sometimes days.” She then went the video clip route showing him altering his stance on refugees and his claim that George W. Bush lied leading up to the 2003 Iraq War — again, tangible, easy-to-absorb stuff that didn’t allow Trump to deny he ever said such things. “How is any of this telling it like it is?” she proceeded to ask, adding, “You change your tune on so many things, and that has some people saying, what is his core?”

Trump responded by agreeing “You’re right” and then stated a need to be flexible on certain positions in order to get things done. Will that answer be good enough those loyal to him in his corner? We’ll see. Answer: Probably… if the recent past is any indication.

The reaction across the Twittersphere was almost universal in its praise for Fox’s approach and execution last night, most notably from those who normally deride the network as being soft/sympathetic on/to the GOP:

The Young Turks: Fox News was the BIGGEST winner of Republican Debate

One of the winners this year has been @megynkelly. She asks good, tough questions. I wish she had the chance to grill Democrats, too.

Credit to Fox News: It asks tough questions of GOP candidates, tougher questions than Democratic candidates were asked in their debates.

To Kristof’s (New York Times) last Tweet, Fox will be hosting its first Democratic Town Hall on Monday. Hillary Clinton will not be attending due to a “scheduling conflict”. Uh-huh. Truth is that Mrs. Clinton, the candidate whom some call the most qualified presidential candidate in modern U.S. history — who hasn’t held a press conference in 91 days — is genuinely afraid to appear on Fox in any capacity, and especially if anyone who was sitting at that moderator table in Detroit — particularly Kelly — is asking the questions.

Since announcing her candidacy almost one year ago, Hillary hasn’t appeared on any program on the network. And the fact that Bernie Sanders — who isn’t scared of anything and stands by the courage of his convictions – will be appearing solo on Monday… speaks wonders about Clinton, who probably saw what Wallace, Kelly and Baier did to Trump on his changing positions last night while questioning his core values and vowed never to expose herself to that kind of scrutiny. Because in the end, as someone who lacks a core herself, she’ll look no better than Trump appeared last night.

As for the rest of the candidates, John Kasich (A+) was the clear winner. Again, the only adult in the room, crisp/lucid on policy and perspective, and has a better record and more experience than anyone on either side of the ledger. It’s probably a matter of too little, too late, but Kasich will be an undisputed #1 choice for VP… that much is certain (unless Rubio gets the nod for other reasons). Ted Cruz (A-) — a world-class debater — was very solid as well, although the most viral clip of him today is that unfortunate white thingy that emerged on his lip. Marco Rubio (C-) got into the swamp with Trump far too often and came across almost as immature (not good when gravitas isn’t an asset already). Honorable mention: Howard Stern (A) got four times as many mentions as Bernie Sanders. Note: Never doubt his title, King of All Media ever again…

As for Trump (D), he easily had his worst night and failed a big test I stated he had to pass earlier that day: Could he pivot to acting more presidential and less petulant? In sizing up his answers (pun intended), the result was a resounding no. But the performance likely won’t matter in the end because, well… nothing seems to knock this freight train of the tracks.

Hopefully moving forward, those who host other debates will take Fox’s cue around full screen graphics to call out other candidates (I also loved CBS’ use of live Twitter questions as well). CNN has the next Democratic debate this Sunday night, so why not ask Bernie and Hillary about offering up free college education, and proceed to put up a full screen illustrating what the cost truly is and let them explain exactly how that gets paid for? Kristof is right: Let’s see some tougher questions asked of the Democratic side… Fox just showed us how it’s done.

FNC won big last night by using a simple formula: Preparation + execution by moderators and a producing team who were working together for a third time this campaign season.

In this case, familiarity didn’t breed contempt, but contrivance.