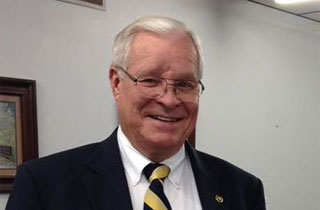 For some reason, in a blog post on his website entitled “Child Abuse Numbers Higher Than People Know”, Missouri State Rep. Bill Lant (R) decided that he would also write a long anecdote about how ugly his formerly-hot high school crush had become. You know, because, uh… child abuse?

Lant, who sits on Missouri’s Joint Committee on Child Abuse and Neglect, began his blog post talking about the plight of the state’s social workers, but then somehow went on a very, very long tangent about his recent 50th anniversary class reunion, where he was astounded to see that people had actually aged. “Somewhere in the recesses of my feeble mind, I expected them to still be 18 like the last time I saw them. Not even close!” he wrote. “Just like most reunions, the jocks all sat at the same table, (not many of them would fit around it) and the cheerleaders stayed home because they didn’t want us to see how old they looked.”

And then it got to the really gross part. Just…just read the entire thing:

The high point for Jane [Lant’s wife] was getting to meet the girl I have mentioned more than a few times over the years because she totally distracted me in Algebra class by wearing a tight cardigan! She even had an exotic name, [name redacted]! It never failed, Mr. Howerton would catch me staring at her and smack me across the knuckles with a ruler. I’m not kidding, have you ever noticed how gnarly my knuckles are?

Well, [redacted] came running over and gave me a big hug and I thought she must have been one of the teachers. Wow! Time has not been kind to that girl! What was stretching the cardigan 50 years ago is now bumping the belt. Jane was laughing so hard she was turning blue.

Literally two sentences later, as Lant wrote about how nice the staff at his Holiday Inn Express was, he said: “Being nice when you don’t have to is something we all should do more of!”

That is a startlingly fast, hypocritical U-turn! Can we get back to the part about fighting child abuse?

More next week, until then I am and remain in your service, (P.S. See, I can write a report without badmouthing the Governor).