GOP Rep’s Campaign Responds to Being Targeted by Bill Maher 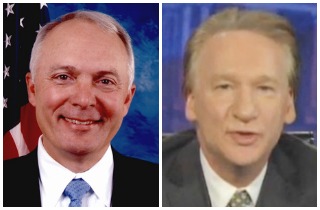 Last night Bill Maher announced the winner of his “Flip a District” campaign: Republican Congressman John Kline. And, of course, Kline’s campaign has since reacted to being the comedian’s new target.

Last night, Obermuller issued a statement in response to Maher targeting Kline. Here’s part of what he said:

We’re glad that the low-profile Kline is beginning to receive the attention he deserves for his actions. It’s a boost to everyone who has worked so hard on our campaign to know Kline is starting to be seen for the Tea Party congressman he is.

Our momentum is building every day. And even with this attention, our efforts won’t change. We’re continuing to build our campaign on the strength of the grassroots organizing we know it will take to win this race.

In response, Kline spokesman Troy Young also put out a statement condemning Obermueller for promoting Maher’s announcement, when the late night host has said plenty of controversial things in the past:

“Minnesotans are tired of sleazy and slimy politics, but DFL candidate Mike Obermueller certainly isn’t. Maher saluted 9/11 terrorists and called our troops ‘cowardly,’ he repeatedly has degraded Christians and calls them ‘schizophrenic,’ and he repugnantly compared special-needs children to ‘dogs,’ yet Mike Obermueller promotes this behavior essentially naming Maher as his campaign manager.”

Kline’s district isn’t really considered competitive, so it only time will tell whether Maher’s announcement will make much of a difference.

You can watch Maher’s announcement here, via HBO: