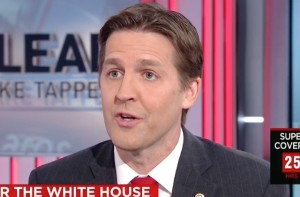 Republican Nebraska Senator Ben Sasse penned an open letter late Wednesday explaining why even after Donald Trump secured the nomination, he still has no intention of voting for him.

“I’ve ignored my phone most of today, but the voicemail is overflowing with party bosses and politicos telling me that ‘although Trump is terrible,’ we ‘have to’ support him, ‘because the only choice is Trump or Hillary,’” he wrote. “This open letter aims simply to ask WHY is that the only choice?”

“With Clinton and Trump, the fix is in. Heads, they win; tails, you lose,” he continued. “Why are we confined to these two terrible options? This is America. If both choices stink, we reject them and go bigger. That’s what we do.”

Instead, Sasse called on Americans to write in a third option. “Why shouldn’t America draft an honest leader who will focus on 70% solutions for the next four years? You know…an adult? Imagine if we had a candidate who hadn’t spent his/her life in politics either buying politicians or being bought… who didn’t want to stitch together a coalition based on anger but wanted to take a whole nation forward.”

“The oath I took is to preserve, protect, and defend the Constitution. In brief, that means I’m for limited government,” he concluded. “And there is no reason to believe that either of these two national frontrunners believe in limiting anything about DC’s power.”