GOP’s Lip Service To Changing Demographics Isn’t Winning Chair Positions, Nor Is It Winning Any Voters

GOP’s Lip Service To Changing Demographics Isn’t Winning Chair Positions, Nor Is It Winning Any Voters 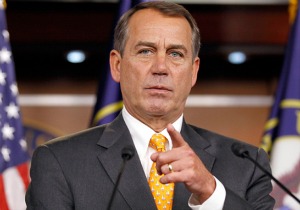 This week, House Speaker John Boehner announced the names of each of the GOP representatives who will chair a House committee in the new term. And much like the major heads and stereotypical supporters of the Republican party, they are all old, white men.

After President Barack Obama won re-election on November 6, many Republican leaders came out to express the idea that the party hasn’t done a great job of keeping up with the changing demographics of America and that in order to survive, this is exactly what the GOP needs to do. Unfortunately, it seems people are still listening to the other Republican party members like Bill O’Reilly, who lamented the death of “traditional America” and expressed sadness that “the white establishment is now the minority.”

Alex Wagner discussed the issue with a panel on her show Now With Alex Wagner Thursday afternoon. She went over the fact that there are several more Democratic women (61) in the House than Republican women (just 20) and wondered aloud whether the GOP was even capable of changing their own party demographics to include more women and minorities.

Although Democratic Senator Patty Murray took notice of the lack of diversity in the list of GOP House Chairs – she tweeted, “Disappointed to see House committee chairmanships in the 113th Congress will not include a single woman. -PM” – leaders in the Republican party have yet to comment. In fact, even Republican aides keeping mum, with The Huffington Post reporting Tuesday, “A House Republican leadership aide declined to comment on the lack of diversity in the party’s committee leadership.”

A Democratic aide, however, had a lot to say: “One would think House Republicans would learn from their mistakes. But they have elected a roster of committee chairs that represent their ranks: old white men.”

One would think, indeed. Is all the talk of “changing demographics” simply lip service to appease disgruntled voters? After getting slammed in a Presidential election, losing the majority in the Senate and having one of their own call the party “racist,” it has to be asked: just what will it take for Republicans to learn that their gameplan isn’t working? What will it take for Republicans to understand that Americans want to see themselves being represented in government – and that Americans aren’t just old and white and male anymore? The face of America clearly isn’t going to regress, so isn’t it time Republicans start to realize this and move themselves forward, as well?

Unfortunately, it appears that the Republican party thinks it can continue to run its campaigns and policies as though we still live in the 1800’s. But the core GOP base simply isn’t strong enough anymore: If the Republican party keeps going in the direction it has started in, far from appealing to new voters, it will alienate even the few women and minorities it has left. Even though many Republican men have denounced evolution, I’d encourage the party to take at least one central tenet from Darwin’s playbook: adapt or die.