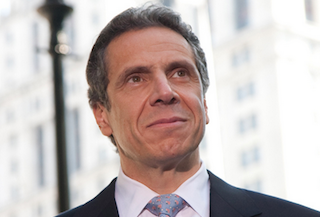 New York Governor Andrew Cuomo had some seriously harsh words for “extreme conservatives” who are trying to make in roads in his state’s political sphere. During a conversation with radio host Susan Arbetter on The Capitol Pressroom Friday, Cuomo said “these extreme conservatives who are right-to-life, pro-assault-weapon, anti-gay” have “no place in the state of New York, because that’s not who New Yorkers are.”

He went on to compare the issues in New York to the “gridlock in Washington”, which he said is “less about Democrats and Republicans” and “more about extreme Republicans versus moderate Republicans.” Cuomo continued, bringing the issue back to New York state:

“Their problem is not me and the Democrats; their problem is themselves. Who are they? Are they these extreme conservatives who are right-to-life, pro-assault weapon, anti-gay? Is that who they are? Because if that’s who they are and if they are the extreme conservatives, they have no place in the state of New York, because that’s not who New Yorkers are.”

Cuomo did say that “moderate Republicans” have “a place in this state,” but “not what you’re hearing from them on the far right.”

Listen to audio below, via WBFO: