Gov. Ed Rendell To Occupy Wall Streeters: ‘Made Your Point,’ Now ‘Organize At The Ballot Box’ 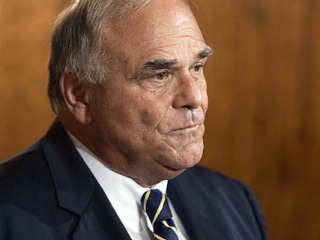 Pennsylvania Governor Ed Rendell (D) spoke with radio host Laura Ingraham today to discuss the Occupy Wall Street protests. Rendell, for one, believes the protesters would be better off expressing their views and enacting change with their votes rather than through a series of demonstrations. “I’d like to go down and ask,” he told Ingraham, “Is everybody registered?'”

He also made sure to note that he agrees that certain positions being expressed by the protesters “need to be addressed,” and that, while he doesn’t really understand how people are able to protest for days or weeks, as long as those protesting follow city-mandated guidelines and protest peacefully, they’ve every right to be out there spreading their messages and voicing their discontent… Even if other methods would be more effective.

The conversation turned to organized labor leader Richard Trumka, who is participating in the protests occurring in lower Manhattan and is attempting to, as Ingraham described it, turn the protests into “an electoral movement.”

RELATED: Glenn Beck: Protestors ‘Will Come For You, Drag You Into The Streets, And Kill You’

Rendell applauded Trumka’s efforts and offered some advice of his own:

Probably a good analogy, Laura, is 1968, when someone finally channeled college kids’ energies into electoral politics. And they went up to New Hampshire and they put on ties and jackets and they went door to door and they talked about the war and Gene McCarthy got 43 percent of the vote and brought down Lyndon Johnson. So yeah, I think that’s Rich Trumka is trying to do.

And again, look, I don’t agree with their message. I mean the guys in Philadelphia said they’re going to be here all winter. Well, that’s silly. You’ve made your point, you’ve gotten about all the publicity you’re going to get. Now get on with your lives and if you really care about this stuff, organize at the ballot box. You know, we can yell and, our side, we can yell and scream about the Tea Party, but the Tea Party folks understood how to make change in 2010. They got out and voted.

Have a listen to the full interview, courtesy of The Laura Ingraham Show: