Gov. Paul Lepage Says ‘The Enemy’ Are Black and Hispanic, and ‘You Shoot at the Enemy’
video

Gov. Paul Lepage Says ‘The Enemy’ Are Black and Hispanic, and ‘You Shoot at the Enemy’ 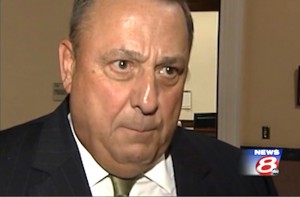 As Maine Governor Paul LePage endures fallout from controversial comments he made over the past week, he has decided to up the ante once again by apparently referring to Black and Hispanic people as “the enemy.”

The governor of Maine is known for having a brusque way of dealing with people, which was on full display recently when he sent a profane, threatening voice message to a state legislator whom LePage believed called him a racist. The supposed criticism came after LePage said minority groups make up the vast majority of drug dealers in Maine, and he appeared to double down on that statement during a Friday press conference.

“Look, a bad guy is a bad guy, I don’t care what color it is. When you go to war, if you know the enemy, the enemy dresses in red and you dress in blue, you shoot at red, don’t you? You shoot at the enemy. You try to identify the enemy. And the enemy right now, the overwhelming majority right now coming in are people of color or people of Hispanic origin. I can’t help that. I just can’t help it. Those are the facts.”