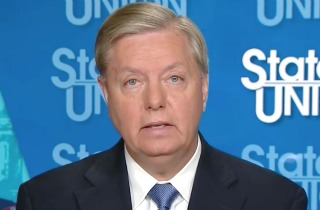 Seems like Lindsey Graham wants to have it both ways. Despite saying that Donald Trump‘s comments about a Hispanic judge were so bad he had to take back his endorsement, the senator is trying to justify the mogul’s racially-charged slams against one of his biggest foes.

Trump took to Twitter again this morning in order to blast Elizabeth Warren in retaliation for a blistering speech she directed at him last night. Of course, Trump had to top off his insulting response by taking another derogatory shot at Warren’s claim of Native American ancestry:

Pocahontas is at it again! Goofy Elizabeth Warren, one of the least productive U.S. Senators, has a nasty mouth. Hope she is V.P. choice.

As far as Graham is concerned, whereas attacking Gonzalo Curiel‘s Mexican parentage was “un-American,” he told reporters from The Hill that the Warren attacks are “funny.”

“I think what he said about the judge was racist,” Graham said. “When you’re talking about a politician, you’ve got to be able to take a joke.”

Graham’s not alone in this assessment. Fox’s Kimberly Guilfoyle opined last month that the “Pocahontas” jabs should be taken as a compliment. Graham did say though that Warren’s speech was also “pretty funny” as she forcefully went after Trump for being a “small-minded, weak, racist”:

“Now the Pocahontas thing. You know she started all of this. I don’t refer to her as Pocahontas. I can see why she would be offended, absolutely. …But given this contest, if this bothers you, you need to get out of politics.”