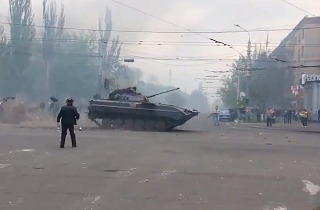 [Some of the video below contains graphic images of violence. Discretion advised.]

The eastern Ukrainian city of Mariupol exploded in violence on Friday as pro-Russian protesters clashed with Ukrainian armed forces. One of the more shocking videos surfacing from the besieged city reveals a firefight breaking out between protesters and Ukrainian forces. A journalist was reportedly shot and killed in the exchange of fire.

As fast as those APCs break through the barriers, though, the civilians milling about the area rebuild them:

The violence escalated as some protesters who appeared to be peaceful began exchanging gunfire with Ukrainian troops. When one civilian rushes toward the troops, he is apparently shot and killed. (Warning: extremely graphic content)

According to reports, the victim was not a protester but a producer for the news organization Ruptly, the video production outlet for the Russian state-owned news outlet RT.

A slightly clearer video of the incident from another angle can be seen here (Again, warning: extremely graphic):

Ukrainian officials claim that at least seven people have been killed and 39 injured so far in operations in Mariupol.

While Russia has asserted that the tens of thousands of troops stationed along the Ukrainian border have been partially withdrawn, NATO Contests that Russian troops remain in place on the border. With the level of violence escalating, it may be a matter of time before Russian armed forces intervene in Ukraine.