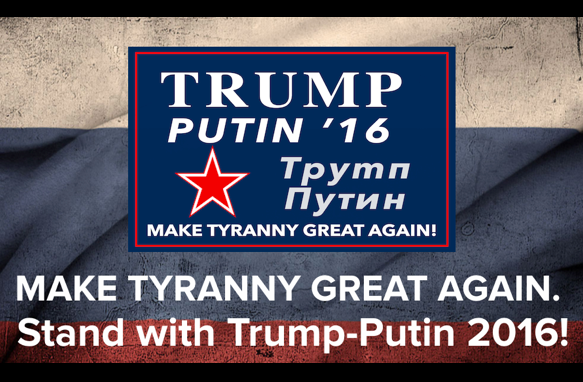 The website, trump-putin2016.com launched several days after Vladimir Putin heaped praise on the Republican frontrunner; the Russian president told reporters Thursday that Donald Trump is “a very bright and talented person and the absolute leader of the presidential race.”

In response, Trump said “It is always a great honor to be so nicely complimented by a man so highly respected within his own country and beyond.” The bromance continued well into Friday, when Trump appeared on MSNBC’s Morning Joe to defend Putin’s praise, telling host Joe Scarborough, “at least [Putin’s] a leader, unlike what we have in this country,”

The website touts the Trump-Putin ticket as “a merger of two great powers,” advising supporters to ignore “the constitutional problems of our candidacy.”

“This campaign will be terrific! huge!” the website reads. Referring to claims that the Russian president kills journalists who disagree with him, as well as recent conflicts between the Trump campaign and the press corps, the website warns members of the media to “sign up at your own risk.”

Donations made through the site are rerouted to Kasich for America; a note at the bottom of the site tells supporters “by signing up, you are waiving all constitutional rights, civil liberties, notions of privacy and subjecting yourself to a steady stream of hugely outrageous comments.”