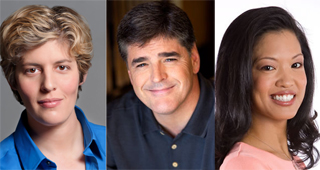 Sean Hannity hosted a discussion on his radio program on Thursday between Sally Kohn, a liberal columnist, and conservative pundit Michelle Malkin. A fight over a column by Kohn that took Malkin to task for “hypocrisy” quickly escalated into a series of personal attacks between the two pundits.

Kohn took on Malkin’s assertion that Mitt Romney’s campaign was being too nice in his campaign against President Barack Obama. She said that there was a measure of hypocrisy in her suggestion that Romney get more aggressive while at the same time admonishing the left for exhibiting a lack of civility.

“I think we can disagree without being disagreeable,” said Kohn. No sooner did she make this assertion than the conversation descended into a name calling and screaming between the two pundits.

“I think that Sally has made quite a nice name and career for herself casting herself as the voice of reasonableness and mistaking her own smugness as civility,” responded Malkin. “I really don’t need lectures from her or anybody else about having to get along with liberals and progressives.”

Malkin said that her blue state residence affords her a measure of credibility on how she is able to communicate with liberals civilly.

“What she wants to do is cast me as a hypocrite for calling out liberals for their rape jokes, death threats, serial misogyny against conservative women,” said Malkin. She defended her comments about liberals that some find offensive as being “funny.”

“look, you want to call it moral equivalence and dismiss it that way, that’s fine,” said Kohn. “I’m not going to have the fight with you. I’m just not.”

“You’re the one that accused me of hysterical hyperbole,” Malkin said to Kohn. She detailed a number of times when she considered “conservative dissent” to be “demonized and criminalized” by organizations and individuals on the left – she said this justifies Romney running a stronger campaign.

“I’m not entirely sure I know how to respond,” Kohn replied. She apologized to Malkin but her apology was rejected. “I’m a naïve idealist who believes in America that we can uphold the tradition of our founders that we can disagree with each other,” said Kohn.

Hannity did say that Malkin should accept Kohn’s apology, but she refused. “This is all kabuki theater,” said Malkin. “She’s not going to be happy until we are all completely politically and ideologically lobotomized and only speak in dulcet tones the way that NPR hosts do.”

Listen to the fight below via the Sean Hannity Show: