Hannity Tears into Stelter: When Will CNN’s ‘FNC Stalker’ Investigate His Network’s Collusion With Hillary?

Hannity Tears into Stelter: When Will CNN’s ‘FNC Stalker’ Investigate His Network’s Collusion With Hillary? 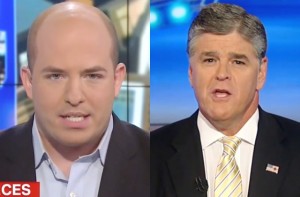 Fox News’ Sean Hannity decided to attack Brian Stelter tonight while the CNN media correspondent mused about how the media needs to change itself after the election.

On Sunday’s Reliable Sources, Stelter conceded that the media largely failed to gauge Donald Trump‘s political movement, and that there are lessons it must learn from the 2016 election. Stelter seemed to address that subject again with a tweet this evening.

I was channeling viewers — some liberals, some conservatives — who feel this is an emergency. https://t.co/uFifGQGqgd

Hannity, one of Trump’s biggest cable news fans, noticed Stelter’s tweet, and he decided to take a swing at him over it:

When will @brianstelter investigate CNN collusion with @HillaryClinton and her campaign. Answer; NEVER. He is a FNC stalker. https://t.co/1Iz1F05Agq

The two media personalities repeatedly clashed with each other over the course of the election. Stelter called out Hannity for “irresponsibly” boosting pro-Trump conspiracy theories and controversial rhetoric, while Hannity has said that Stelter is a “little pipsqueak” who spent his time sucking up to Hillary Clinton.

UPDATE – 7:08 a.m. ET: Stelter eventually responded after Hannity expressed agreement with the idea that CNN and several other news outlets should not be given White House press credentials”

Tonight @SeanHannity, who's not a journalist, agreed that "CNN, NYT, WaPo" and others "should not receive WH press credentials." https://t.co/QNygGAQtlY