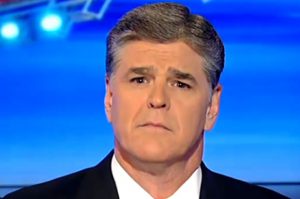 Sean Hannity has recently started to indulge more in what one might call tabloid conspiracies, but today he did apologize after sharing one.

See, Hannity keeps up with the site The Gateway Pundit, and one of the posts up earlier today was titled “Rats Jump Ship=> Michelle Obama Did Scrubs Hillary Clinton from Twitter History?”

WOW WHAT A BOMBSHELL except for the fact that this didn’t happen.

What was the evidence of this? That @MichelleObama apparently hasn’t tweeted anything since early 2013.

Somewhere in the “game of telephone,” as CNN puts it, declarations that President Obama and Elizabeth Warren did the same followed suit. Both of these are, too, untrue:

So moved and so inspired by that powerful speech from our next President! #ImWithHer and I am fired up and ready to go. -mo

Outstanding 3 for 3 debate sweep for @HillaryClinton! Nobody has ever been more prepared to be @POTUS.

.@HillaryClinton proved tonight: She has brains, guts, thick skin, steady hands, & most of all: basic decency. #ImWithHer & proud of it. pic.twitter.com/Q0Au2Zy50h

Hannity ended up being told about this on the radio today and reacted by saying, “Wow. That means they know it’s huge.”

Yes, this whole thing is apparently about the Obamas and Warren wanting to distance themselves from Clinton over the emails.

Correction. Live on radio I read a gateway pundit report that @MichelleObama had deleted mentions of HRC. And a listener said BHO and…

Elizabeth Warren did same. Fact is they didn't. I humbly apologize. Live radio

You can listen to the audio above, via The Sean Hannity Show.