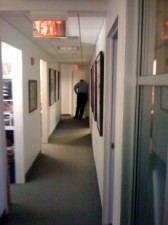 Yesterday, we noticed that the New York Times profile of a shifting, and possibly floundering, Harper’s magazine focused on the increasingly second-guessed moves of publisher Rick MacArthur. Tuesday, in a follow-up by the Observer‘s John Koblin, Harper’s staffers are called “queasy” about MacArthur’s “increased visibility in their lives.” Not exactly a vote of confidence in a time of turmoil.

In a visual worth as much as both pieces combined, the photograph attached to Koblin’s article (above) catches a Harper’s executive eavesdropping on the New York Times interview with MacArtuhur. One staffer, in support of recently fired editor-in-chief Roger Hodge, is quoted as saying, “He was good about keeping Rick [MacArthur] out of our hair.” Mutiny, or a mass restructuring, sounds not far off. Koblin writes:

Candid quotes from anonymous staffers indicate anxiety about MacArthur’s micromanaging and the worry that “we are going to be creating this magazine for an audience of one now.” Harper’s numbers were already dwindling, but one — and maybe MacArthur soon — is indeed the loneliest.

Listening in on the Harper’s Meltdown [New York Observer]