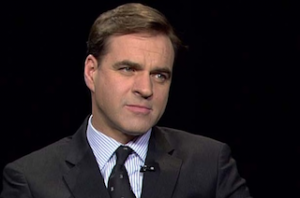 Conservative Harvard professor Niall Ferguson reportedly told a large group of financial advisers and investors in California this week that the problem with John Maynard Keynes‘ economic philosophy was that he didn’t care about future generations. Ferguson came to this conclusion because Keynes was gay and had no children.

Financial Advisor magazine’s Tom Kostigen was the first to report the statements by Ferguson, writing:

Ferguson responded to a question about Keynes’ famous philosophy of self-interest versus the economic philosophy of Edmund Burke, who believed there was a social contract among the living, as well as the dead. Ferguson asked the audience how many children Keynes had. He explained that Keynes had none because he was a homosexual and was married to a ballerina, with whom he likely talked of “poetry” rather than procreated. The audience went quiet at the remark. Some attendees later said they found the remarks offensive…

[Ferguson said] it’s only logical that Keynes would take this selfish worldview because he was an “effete” member of society. Apparently, in Ferguson’s world, if you are gay or childless, you cannot care about future generations nor society.

Ferguson evidently realized his comments were controversial and potentially offensive, as he published an “unqualified apology” on his website today:

During a recent question-and-answer session at a conference in California, I made comments about John Maynard Keynes that were as stupid as they were insensitive.

I had been asked to comment on Keynes’s famous observation “In the long run we are all dead.” The point I had made in my presentation was that in the long run our children, grandchildren and great-grandchildren are alive, and will have to deal with the consequences of our economic actions.

But I should not have suggested – in an off-the-cuff response that was not part of my presentation – that Keynes was indifferent to the long run because he had no children, nor that he had no children because he was gay. This was doubly stupid. First, it is obvious that people who do not have children also care about future generations. Second, I had forgotten that Keynes’s wife Lydia miscarried.

My disagreements with Keynes’s economic philosophy have never had anything to do with his sexual orientation. It is simply false to suggest, as I did, that his approach to economic policy was inspired by any aspect of his personal life. As those who know me and my work are well aware, I detest all prejudice, sexual or otherwise.

My colleagues, students, and friends – straight and gay – have every right to be disappointed in me, as I am in myself. To them, and to everyone who heard my remarks at the conference or has read them since, I deeply and unreservedly apologize.

In the past, Ferguson has had no qualms with courting controversy, as Americans found out when he published his “Hit The Road, Barack” cover story in Newsweek last August. The piece received harsh backlash from Paul Krugman, Andrew Sullivan and others, but was wholeheartedly defended by editor Tina Brown.