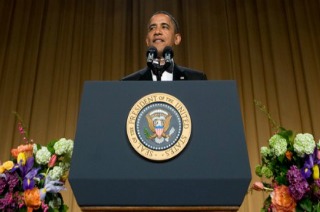 President Barack Obama closed his well-received address to the assembled members of the press and the political class in Washington D.C. on Saturday night by scolding them both. “[I]f we’re only focused on profits or ratings or polls, then we’re contributing to the cynicism that so many people feel right now,” Obama said to the wild applause of a room full of people he had just admonished. Whether that response was Pavlovian or polite, it was unnecessary — Obama was dead wrong. Ratings and polls are the only scientific and market indicators that tell these institutions whether they are doing a good job and living up to the public trust. Ignoring those metric leads to bad policy and bad programming. It does, however, make it easier for politicians to push unpopular agendas unhindered by a disapproving public. The media and the politicians assembled at the White House Correspondents Dinner on Saturday would be well served if they disregarded Obama’s advice.

Nielsen ratings, which provide a window into what a sample of households are viewing on television, have an unearned bad reputation. Many believe that ratings reinforce the fallacious notion that what is popular is, by definition, good. But ratings are themselves not a malicious force in the television programming industry, and observing and internalizing those ratings trends is certainly not something to scold programming executives in the news industry over. A case for why ratings-driven decision making in the cable news industry is a good thing can be found in the recent experience of CNN’s executives.

In the wake of Jeff Zucker’s takeover of the cable news giant, the network underwent a significant rebranding which bordered on the schizophrenic. CNN’s dayside programming regularly featured between four and seven-person panel discussions about the latest pop culture fad while much of their primetime programming strove to focus on hardnosed investigative reporting. The signals were deeply conflicting and the network’s ratings suffered.

Then, in the wake of the attack on the Boston Marathon on April 15, CNN decided to go wall-to-wall with coverage of the attack and its aftermath. Even today, many of the network’s anchors and personalities are still in Boston covering the ongoing investigation into the attack. The network was rewarded in the ratings for going back to their roots and covering hard news as hard news. In spite of the fact that not a single comedian weighed in on what they think about the bombing, CNN beat both Fox News Channel and MSNBC in the coveted 25 – 54-year-old demographic on average during the week bookended by the Boston attack and the arrest of Dzhokhar Tsarnaev.

Market signals are critical feedback for any product or service provider and cable news networks are no exception. Ratings are essential to understand whether a network is doing a good job and providing consumers with the type of product they want. For those who worried that CNN’s effort to rebrand as an entertainment network would be rewarded by viewers and thus push the news industry in a direction that could undermine the imperative of fostering an informed public debate, they should breathe a sigh of relief. Those fears have proven unwarranted.

But Obama also scolded the assembled members of the press and the political class for focusing too much on polling data. This is a tired rhetorical device used by politicians to suggest that their stalwart defense of this or that noble principle in the face of opposition from either an uninformed public or entrenched interest groups is the only honorable course of action. In fact, if the media focused more on the breadth of public polling to inform their programming, the news media could dramatically improve their coverage of events. It is likely, too, that their coverage would more accurately reflect public concerns.

Take, as just one recent example, the 18-week-old debate over new gun control laws that followed the massacre at Newtown, Connecticut. The news media has been quick to focus broadly on polling data which suggests that individual policy proposal like an increase on background checks for gun purchasers enjoys bipartisan popularity. The news industry is guilty, however, of ignoring data that shows that voters are not interested in the gun debate. Full stop.

Much has been written about Gallup’s survey showing that just 4 percent of voters rate gun control as their top priority, but Pew Research Center’s survey of priorities is slightly more informative. In January, in the immediate wake of the atrocity at Newtown, new gun laws still ranked 15th out of 18 priorities according to Pew – even though that number was buoyed by the 69 percent of Democrats who felt the issue should be of paramount concern.

The cherry-picking of data is likely to continue today. The Democratic firm Public Policy Polling has released a slew of surveys which purport to show that the constituencies of a handful of Democratic and Republican Senators who voted against a series of new gun control laws on April 17 strongly disapprove of their votes.

The chances are, though, that the media will report these numbers without noting the findings in a Washington Post/Pew Research Center survey released last week which showed that a plurality of independent voters nationwide are “very happy” or “relieved” that new gun laws did not pass the Senate. Furthermore, of the people surveyed who confessed to paying “close attention” to the gun debate in Washington, 33 percent said they were “very happy” with the outcome of the April 17 vote. Only 22 percent said they were “angry” by the Senate’s refusal to pass new laws.

These details would greatly inform the coverage of the gun control debate in Washington. The media can be forgiven for ignoring terrorism, the economy, unemployment and the deficit – the four ranking issues that Pew registers as voters’ top priorities – because they are chronic and not driving the debate in D.C. A smart analysis, however, of polling data on the gun control situation would note that it is far more of a mixed bag for Washington’s incumbent legislators. The single most important observation that can be derived from an expansive reading of the polls on gun control being that the amount of focus that Congress has devoted to new gun laws is likely to be perceived as indicative of that institution’s inability or unwillingness to focus on the economy and joblessness.

One would think the media would jump at the opportunity to remind the political establishment that they are ignoring the genuine concerns of the public in favor of devoting outsize coverage to the contrived and fleeting legislative passions of the moment. Is it any wonder that both Congress and the media enjoy about the same level of trust from the public?

Obama’s advice to the press to ignore the metrics which tell them whether they are doing a good job or not is deeply revealing. But it is not their focus on ratings and polls that is “contributing to the cynicism that so many people feel right now.” It is because the media and the political class so often ignore public opinion and market signals that so much of the public confidence has been lost.