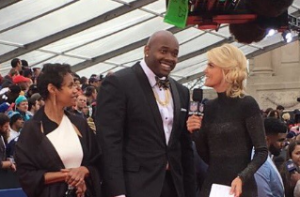 Every prospective NFL player falls asleep the night before the draft dreaming of being the most talked-about pick the next day. Visions of Twitter trends and press conferences dance in the heads of young American men. Laremy Tunsil achieved all of that last night, but probably not in the way that he wanted to.

Between the video of him smoking weed in a gas mask that was posted to his (now-deleted) Twitter and the incriminating texts uploaded to his Instagram, he had a busy enough night without even being the 13th draft pick and heading to the Miami Dolphins.

He ended up showing up, though!

Just heard from Dolphins first round draft pick Laremy Tunsil at a press conference in Davie, and he says he is blessed to be here. @nbc6

Haha the media couldn’t even wait 24 hours to try to turn Laremy Tunsil from victim to UNCOACHABLE MALCONTENT for missing a presser.

Obvious that Laremy Tunsil is coachable. Amazing how quick that allergic reaction got cleared up…yet he had no clue how it happened. ;)

Somehow, he even managed to turn some of the public reception around.

Now that we have all the facts, I’d like to apologize to Laremy Tunsil for calling him a dumbass, posting that video right before the draft.

Maybe the best reaction so far has been his, since he’s been keeping it positive.

What do you think? Did he have an allergic reaction? Is he handling this whole thing right?